Ulster University has given its support to a PSNI initiative that aims to keep young people, including students from universities and colleges across Northern Ireland, safe during nights out.

The PSNI One Punch campaign is aimed at males aged between 18–25 years old and highlights the risks of getting involved in even the most innocent of arguments that could lead to serious injury or even death. Ulster University is lending its support to the initiative as part of its commitment to safeguarding students and their personal safety. Through the campaign, students are being advised to act responsibly on nights out, stay close to their friends and plan their journey home in advance. 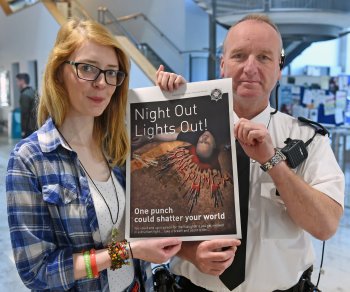