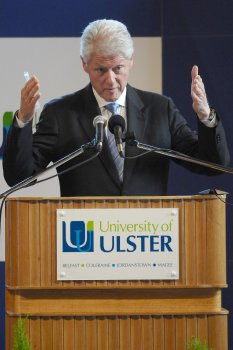 The University of Ulster is to host a visit by US President Bill Clinton to Derry~Londonderry on March 5, 2014.

During his visit, the President will address a public audience in the city’s Guildhall Square to honour the contribution of John Hume to peace in Northern Ireland, and to help launch ‘Peacemaking In The Twenty-First Century,' a new book celebrating the Tip O’Neill series of peace lectures given at the University’s Magee campus.

“President Clinton is an Honorary Graduate of Ulster, and has a long history of engagement with the University, particularly with our Magee campus in Derry~Londonderry.”

“We are honoured that President Clinton will be with us both to launch the book and to support the developments at INCORE, the University’s international peace and conflict centre, linked to the John Hume and Thomas P O’Neill Chair in Peace.”

Nobel Laureate John Hume held the Tip O’Neill Chair in Peace Studies at the University of Ulster from 2002 to 2009.

Derry City Council is providing support for the event. Mayor Martin Reilly said: “It is a great pleasure to welcome President Clinton back to the city at this time, to see for himself the significant advances that have been made here in recent years.”