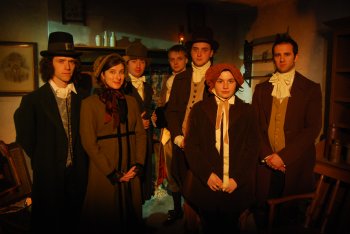 University of Ulster staff and students from the School of English and History’s Poetry Society star in the new series of BBC NI Ulster-Scots programme, 'Santer', which begins on Wednesday September 18.

Episodes four and five of the six-part series will be broadcast on October 9th and 16th, and discuss the tradition of 'reading houses' in Ulster and their links to 19th century Ulster-Scots poets.

Reading houses were essentially social gatherings where those who earned enough money to have leisure time, gathered together to read and recite poetry, discuss history, theology and politics, and the fundamental issues of the day.

Attired in authentic costume and reciting readings in Ulster-Scots, University of Ulster students literally bring 19th century Ulster and the 'reading house' back to life.

Ulster lecturer Dr Kathryn White, who acted as consultant and also presents on the programme said: “This has been a fantastic experience for our students and has helped them engage with the literary traditions of this region, as well as giving them an insight into television production.

“The 'Ulster-Scots Poetry Project' which supplied many of the poems for the series is delighted that many more people will have the opportunity to learn about Ulster’s literary history.”

Head of the School of English and History at Ulster, Professor Jan Jedrzejewski, commented: “I am delighted to see some of my colleagues and students helping to recreate the history of 19th century book clubs – this is precisely the kind of occasion where the past that we study and the present that we live and work in, come together in a meaningful way to produce new concepts, ideas, and insights, for ourselves and for the community at large.”

Dr Frank Ferguson, Director of the Centre for Irish and Scottish Studies said: “This programme demonstrates how the research strengths we possess in Ulster-Scots literature, culture and history at Ulster, can provide film makers with the key materials they require and shows the literary skills and performance talents of our colleagues and students.”

The new six-part series of 'Santer'begins on Wednesday 18th September at 7.30pm on BBC2 NI.

Presented by Anne Morrison-Smyth, the first programme in the new series of ‘Santer’ sees Frank McLernon trying his hand at falconry in the countryside between Ballyclare and Ballymena, while Zoe Abraham learns about drum making outside Rathfrailand and Gibson Young and Liam Logan discuss the subtleties in Ulster-Scots words.

Scottish fiddle superstar Alasdair Fraser opens the series with a performance with Natalie Haas, while later in the series viewers will hear from Ballymena flute band, The Young Conquerors, Anthony Toner, Session Beat and hear the work of local composer Elaine Agnew, whose piece 'The Dark Hedges'was inspired by the famous trees near Armoy.

Also in the series, Mark Wilson explores the migration of Ulster Scots to New Zealand and plays a few tunes along the way. Mark begins his journey in the town of KatiKati where some of the first settlers landed.

Here Mark is given the traditional Maori welcome, the Haka, and learns about Donegal man David Gallaher who became the first captain of the famous All Blacks rugby team.

On Mark’s journey, viewers will hear of the influence of the Ulster Scots throughout the North and South island. 'Santer'has been produced for BBC Northern Ireland by Barking Films and Blackthorn Productions.