From Derry to Mostar - Bridging Division 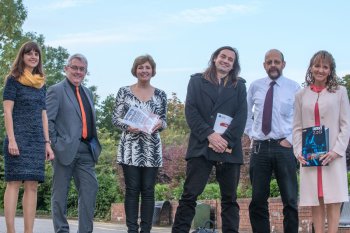 Delegates from Ireland, the UK, Germany, Flanders (Belgium) Catalonia (Spain), Lithuania, Bosnia-Herzegovina, Croatia, Macedonia and the US considered some of the many parallels and differences between Derry and the Bosnian city of Mostar at an international conference hosted by the University of Ulster at Magee.

Co-convenor of the conference, Dr Ã‰amonn Ã“ Ciardha explained that the three day conference was part of an on-going, comparative project with Dr Gabriela Vojvoda-Engstler, University of the Saarland.

The event at Magee entitled: “Cities Divided – Cities United: Bosnian and Northern Irish identities in the city literatures of Belfast, Derry/Londonderry, Mostar and Sarajevo,”is the first in a series of three international conferences. Next year, the conference will be held in Sarajevo and the following year, it will be in the German city of Saarbrucken.

Dr Ã“ Ciardha, a senior lecturer in Irish Language and Literature at the University of Ulster continued: “Derry~Londonderry and Mostar effectively portray divided and (re)united communities, providing a microcosm of national, ethnic, political, military, religious, ideological and cultural conflicts in their respective regions.

“These historic, iconic cities, which are located in composite states and divided societies, emerged as major hotbeds of the political activism in post-colonial and post-communist Europe in the latter part of the 20th century.

With both cities now emerging from conflict, papers presented during the three day event looked at how the inhabitants of both cities have tried to preserve their disparate, threatened identities and considered the pace of progress of both the Good Friday and Dayton Agreements.

Dr Ã“ Ciardha continued: “Both Derry and Mostar are divided by rivers and defined by iconic bridges and city walls: The River Foyle divides Derry~Londonderry into the predominantly Catholic Cityside and Protestant Waterside.

“The River Neretva divides Mostar on an east- (Muslim ) west (Croatian, Catholic) axis, with a Serbian Orthodox minority. The Civil Rights Movement effectively emerged from Derry in 1968 and it provided the setting for some of the worst violence of ‘The Troubles’ but since the Good Friday Agreement, it has become a key focus of cross-community peace-building and reconciliation.”

Similarly there have been ongoing cross-community peace-building efforts in Mostar. The famous Stari Most bridge dates back to 1566 and was symbolic of the glories of a golden age of Ottoman architecture and a physical link between east and west, Islam and Christianity. The bridge was destroyed by the Croatian military in 1993 but was subsequently rebuilt and reopened by UNESCO and the Turkish Government in 2004.

“Both the Stari Most and Derry’s Peace Bridge provide powerful symbols of the reunion of cities in conflict,” said Dr Ã“ Ciardha.