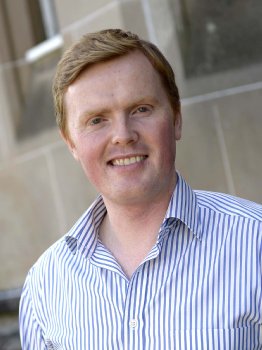 The University of Ulster has appointed Dr David Hassan as Professor of Sports Policy and Management.

Professor Hassan is a member of the Sport and Exercise Sciences Research Institute at Jordanstown and has enjoyed a distinguished career as a respected researcher, author and teacher. His promotion to the rank of professor recognises his outstanding contribution to his academic field.

A native of Feeny, County Derry and a former pupil of St Columb’s College, Derry, Professor Hassan is best known internationally for his collaborative work with the FÃ©dÃ©ration Internationale de l'Automobile (FIA), the world governing body of motorsport, whilst locally his seminal research on Irish sport was honoured in 2009 by President of Ireland Mary McAleese.

Professor Hassan holds a Distinguished Research Fellowship from Ulster in recognition of his outstanding contribution to research, defined by its quality, breadth and impact. His work examining sport management in the Middle East was acknowledged by His Highness Sheikh Nahyan bin Mubarak Al Nahyan, the UAE Minister for Culture, Youth, and Social Development, in March 2013. Similar work in the UAE has been supported by Peter Robinson and Martin McGuinness, First and Deputy First Ministers in the Northern Ireland Assembly and Invest NI.

The Jordanstown based academic has published 11 books and over 130 other research outputs, including more than 70 peer reviewed articles in leading international journals and book chapters. A commissioned anthology of his foremost academic writings will be published by Taylor and Francis in 2015.

Professor Hassan is founding Co-Director of the Special Olympics Regional Research Collaborating Centre for Europe-Eurasia at Jordanstown. This work has significantly enhanced the use of sport to aid levels of integration by young people with intellectual and developmental disabilities across Europe. In 2009, Professor Hassan was awarded a US Government grant to undertake further collaborative study with Boston College, Mass.

He is a Visiting Professor at the University of Technology, Sydney and Griffith University, Gold Coast, two of Australia’s highest ranked universities. He was appointed an International Scholar with the International Football Institute in 2008, whilst he has delivered more than 20 invited lectures, including at Oxford University and University of London, over recent years.

Beyond his academic achievements, Professor Hassan is also well known in sporting circles. He remains one of the few players to have represented his native Derry at senior level in both Gaelic football and hurling. He was also a member of the Cliftonville FC squad that won the Irish League championship during the 1997/98 season – the first championship in 88 years. He is currently part of the Derry senior football management team supporting Brian McIvor as the county return to Division 1 of the NFL.

Professor Hassan began his education at St. Canice’s Primary School, Fincarn, and in fact was guest speaker at the school’s golden anniversary in 2008. He went on to study at St. Columb’s College in Derry where he captained the school’s Gaelic football teams at all levels. He holds Bachelors (First Class), MSc and Doctoral (awarded in 2001) degrees from the University of Ulster and was appointed to a Lectureship position with the University in 2002. In 2006 he was promoted to a Senior Lecturer post at Ulster

On his appointment Professor Hassan said: “Naturally I’m delighted to be given this honour by the University. Ulster is one of the leading institutions in the UK and Ireland for sports-related scholarship and, looking ahead, I hope my research examining the effective management of sport, both at home and abroad, will further enhance this reputation and benefit the region that it serves.”