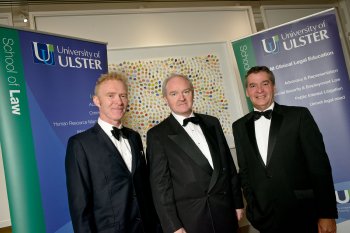 Hosted by Ulster’s Vice-Chancellor, Professor Richard Barnett, the prestigious event celebrated the School’s achievements and exciting plans for the future.

The University of Ulster School of Law inducted its first group of students into undergraduate degrees in 1992.

Since then the School has grown to provide a full suite of undergraduate and postgraduate degrees in both its Jordanstown and Magee campuses, as well as professional legal study in the Graduate School of Professional Legal Studies, in Magee.

Ulster Law graduates are now found in the legal professions at home and further afield and in academic, accountancy, managerial and journalism positions in particular.

The redevelopment of the Belfast campus will see new, high-tech, moot court facilities developed for the Law School’s use and continued development of the Ulster Law Clinic (the free social security and employment law advice clinic, operated by postgraduate students, as part of the new and innovative LLM in Clinical Legal Education), as well as the development of new courses to service market needs in the areas of Commercial and Medical Law.

The gala event also saw the launch of the Law School Support Fund, which is intended to help students who may be suffering financial hardship or, alternatively, to reward excellent performance by students.

“In a relatively short period of time Law at Ulster has established itself as one of the UK’s leading Law Schools,” said Professor Barnett.

“Our research is ranked in the top 20 and our graduates are making significant contributions to the legal profession and legal research in Northern Ireland and internationally.

“I congratulate our law graduates and staff in their magnificent achievements.”

Dr Eugene McNamee, Head of School, said:"The Law School is celebrating its graduates and staff and toasting its achievement in providing a challenging and supportive learning environment for legal education and scholarship in Northern Ireland.

“We now deliver undergraduate degrees, LLM programmes, supervised PhD study and a solicitor qualification programme and, for example, we have pioneered the way for part-time legal education in Northern Ireland.

“Now is the time to celebrate the impact our graduates have made and enjoy their achievements.”

Speaking at the event, Lord Chief Justice, Sir Declan Morgan said he was delighted to share in the celebrations: “This University has provided diversity and challenge in all that it does and law is no exception.”

He added that the development of the Ulster Law Clinic as part of the Clinical Law course has been a “notable feature, recognising the relationships and service that can be established by academic institutions embedded in their community”.