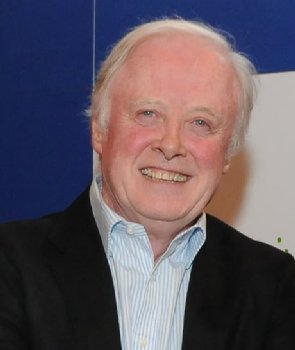 One of the UK’s foremost business leaders Sir Gerry Robinson is the latest influential figure to take part in the popular University of Ulster Life Stories series of public conversations.

Sponsored by Danske Bank, Life Stories is a series of interviews with prominent Ulster graduates and honorary graduates who have excelled in their chosen sphere.

The latest event will take place on Wednesday October 16, at 8pm in the Conor Lecture Theatre on the University’s Belfast campus.

Gerry Robinson was awarded an honorary Doctorate of Literature (DLitt) in 1997 for his services to industry. In the New Year Honours List 2003, he was awarded a knighthood for services to the arts and business.

Born in Dunfanaghy, Co Donegal, he is one of the major figures in the UK television market. He joined Granada in 1991 as chief executive and was chairman from 1996 until 2001.

He has since presented a number of other BBC series such as ‘Gerry Robinson's Car Crash’, ‘Gerry’s Big Decision’ and ‘Can't Take It with You’.

The Life Stories series offers audiences a rare opportunity to hear a personal account of the life and achievements of distinguished Ulster alumni.

The in-depth interviews, punctuated with examples of their work, explore each guest’s early years, the key landmarks in the development of their career and the highs and lows of their working life, as well as their outlook and plans for the future.

Looking forward to the evening, Pro-Vice Chancellor and Provost of the Belfast campus, Professor Alastair Adair commented: “I am thrilled to welcome Sir Gerry Robinson and the Life Stories series to the Belfast campus.

“These evenings allow extraordinary University of Ulster alumni to share their experiences and inspire the audience to pursue their own greatness.”

“The Gerry Robinson evening is a fantastic opportunity to get a unique insight into the life and work of one of Ireland’s most successful businessmen.”

In what is sure to be an interesting and lively discussion, Head of Ulster’s School of Creative Arts, Professor Paul Moore, will interview Sir Gerry Robinson on Wednesday, October 16, at 8pm in the Conor Lecture Theatre, Belfast campus.

Admission is free, but places must be reserved. For further information or if you would like to attend, contact Cheryl Mullan on 028 71675679 or c.mullan@ulster.ac.uk

Gerry Robinson was born one of 10 children in Dunfanaghy, Co Donegal.

When he was in his early teens, the family moved to England where Gerry attended St Mary’s Seminary, Castlehead, Lancashire.

He began a career in accounting in 1965 as a clerk with Lesney Products, (Matchbox Toys). Since then he has gone on to head some of the largest companies in the UK.

During his time at Lesney, he qualified as an ACMA and progressed to become the Company’s Chief Management Accountant. In 1974, he moved to Lex Service Group’s Volvo network, becoming Financial Controller and Finance Director of Lex Industrial Distribution and Hire by 1980.

He joined Grand Metropolitan’s UK Coca Cola Business, in 1980, subsequently becoming Chief Executive of its whole Contract Services Division. In 1987, he led the UK’s then largest management buy-out of the Division, which was renamed the Compass Group, and later floated on the London stock market.

Life Stories interviewer Professor Paul Moore is Head of the University of Ulster’s School of Creative Arts at the Magee campus.

He has published widely in a range of journals and his own practice is in the area of sound art.

He has produced a number of commissioned gallery exhibitionsin Coventry, Belfast, Lough Neagh, Derry and, most recently, the National Gallery in Namibia.

In his spare time he is a freelance broadcaster with BBC Radio Ulster and has written and presented a range of documentaries for BBC national radio.