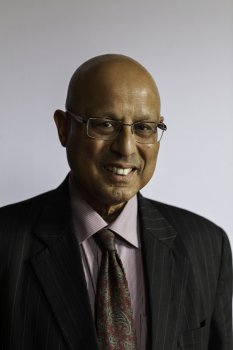 For ardent sports fans, decision review technology – popularly known as Hawk-Eye – is having a ‘marmite moment’. It’s either welcomed as a definitive mechanism to assist a referee make the right decision or an imperfect tool which has done nothing to improve the enjoyment of sporting fixtures. Now used in a wide range of games including football, tennis, hurling and Gaelic football, it has often proved controversial.

Following a divisive summer Ashes series, cricket-lover and Professor of Applied Economics at the University of Ulster, Vani Borooah, has written a paper on cricket's Decision Review System (DRS) to be published shortly in the Journal of Sports Economics.

His research focuses on the value of the DRS in one-day internationals and test matches and the impact that it has had on the game.

Professor Borooah explained: “DRS is a complex computer system used to visually track the trajectory of a ball and display a record of its most statistically likely path as a moving image. One of the problems that the use of Hawk-Eye poses is the implicit belief in its infallibility. Even when participants feel that Hawk-Eye’s imagery contradicts the evidence of their eyes they have no option but to believe in Hawk-Eye. The technology has made a huge impact on the game and not necessarily for the better.

“Under the DRS, a player may request a review of any decision taken by the on-field umpires concerning whether or not a batsman is dismissed, with the exception of ‘Timed Out’.

“When DRS is being used, the question of which decisions to have reviewed assumes great importance for a team: since a failed review is a review lost, a review should only be asked for when the aggrieved party feels that there is a ‘good’ chance that the on-field decision is wrong.

“The result of this is that international cricketers, in addition to the traditional skills of batting, bowling and fielding, have to learn a fourth skill – the ability to use DRS effectively. A side can end up losing a match, not because it was deficient in terms of cricketing skills but because, compared to the opposition, it made poor use of DRS.”

The paper questions whether or not the use of DRS gives value for money as it computes the expected number of reviews in one-day internationals and in test matches and concludes that the cost of a review can be very high.

Professor Borooah added: “The paper shows that errors can be made by technology (Hawk-Eye) and by humans (on-field umpires), but the question is which of these two sources of error makes the larger contribution to the overall error rate?

“The gain from using DRS, in terms of an improvement in the percentage of correct decisions (from 93.1% to 95.8% for the first Ashes test of 2013), is miniscule relative to the large sums of money required for installing DRS. If ‘getting it right’ is so important to international cricket then, arguably, the same gains could be harvested, at much lower cost, by investing in more training of umpires and a determined search for more good umpires.”

Professor Borooah contends that the use of technology in sport is welcome when it is used to avoid obvious errors that are plain to all but in situations where no obvious error exists, human judgement should be sovereign.

He said: “The DRS may have departed from these principles on occasion, but the use of technology-driven sporting enhancements are too deeply embedded in cricket – precisely because they have done much to increase spectators’ enjoyment – for cricket to turn its back on the DRS, the child that this technology has spawned.”