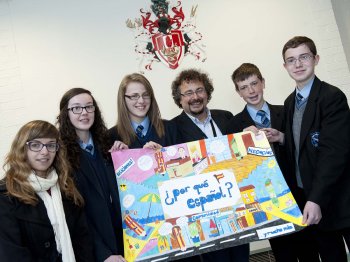 Students from schools across the north-west have been showcasing their Spanish skills at the University of Ulster’s Coleraine campus.

The students have been learning how to communicate through Spanish in a range of everyday situations and have been introduced to the different aspects of Spanish culture and traditions during a series of workshops and tutorials led by staff from the School of Modern Languages.

They have also been working on a poster presentation highlighting the advantages of studying languages which was showcased at the Laser Project Exhibition and Awards Ceremony hosted at the university.

The pupils made presentations in Spanish and English to an invited audience including staff, students and representatives from the local business and political community.

Dr David Barr, Head of the School of Modern Languages, said: “The Laser Project has presented an exciting opportunity for the university to promote the many benefits that studying another language brings as well as giving some young people from schools across the north-west a chance to try out a new language, like Spanish, for themselves.

“The students who have taken part in the project have become ambassadors for learning languages and we hope that they will take this enthusiasm back to the classroom and encourage more young people to get involved.”

Dr Stanley Black, Senior Lecturer, School of Modern Languages, added: “The LASER project aims to raise awareness of the many benefits and satisfactions to be gained from speaking a foreign language.

"As well as great fun, speaking a language, at whatever level, is a tremendously enriching social and professional skill and an important aid to intercultural harmony.”

The Laser Project is funded by the University of Ulster as part of its widening access and participation strategy.