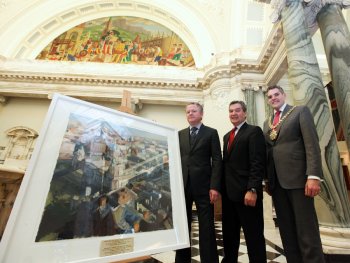 The University of Ulster has presented a specially commissioned painting of Belfast City Hall to the Lord Mayor to mark the 400th anniversary of the granting of the Belfast Town Charter in 1613.

The painting is by Colin Davidson FRUA, President of the Royal Ulster Academy and an alumnus of the University, and was presented to the Lord Mayor in the Rotunda of the City Hall, where a mural by distinguished Ulster artist John Luke depicts the proclamation of the Town Charter in the reign of James I.

The Vice-Chancellor, Professor Richard Barnett, said: "The University is delighted to mark the 400th Anniversary of the Belfast Town Charter by making a presentation to the City Council of this fine painting of the Belfast City Hall. It reflects the significant and on-going contribution of the University to the city – and in particular the Belfast School of Art, which celebrates its 165th anniversary next year.

"This presentation reflects the long and significant contribution of the University to the city. It builds upon the much admired mural in the dome of the City Hall depicting the granting of the Town Charter in 1613. This mural was painted by our alumnus John Luke in 1950 – who was a part-time student and later lecturer, at the Belfast School of Art.

"The University of Ulster is fully committed to continuing its significant contribution to the education and wellbeing of the city and its citizens. It gives me great pleasure to unveil this painting and present it to the city.

"I want to thank you most sincerely for the commitment that the University of Ulster has shown to the city and the City Council, and to thank you for all that you have done to help shape the future success of Belfast."

CELEBRATION: Artist Colin Davidson FRUA , with University of Ulster Vice-Chancellor Professor Richard Barnett and Lord Mayor of Belfast Alderman Gavin Robinson at the presentation of a specially commissioned painting of the City Hall to Belfast City Council. In the background is John Luke's iconic image of the granting of the Town Charter to Belfast in 1613.