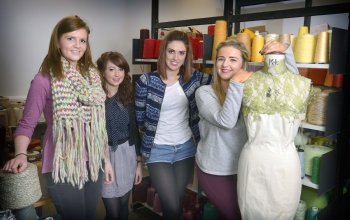 Four University of Ulster art students are through to the final of a major fashion competition which is hailed as a launch pad for Ireland’s top designers.

The successful students will have their creations showcased at the glamorous Golden Egg Fashion Innovation Awards which takes place in Galway later this month.

This prestigious event gives visibility, support and a voice to young design talent throughout Ireland, offering a fantastic opportunity for their work to be scrutinised by a panel of top fashion experts.

Ulster’s four rising stars who hope to impress the judges are Melissa Gormley, Jenna Mulligan, Orlagh Murdoch and Rachael Aiken. They have each made it through to the ‘Student Designer of the Year 2013’ category and are showcasing a variety of unique designs.

Rachael, from Omagh, was inspired by the beauty of Inis Meain, one of the Aran Islands. She drew on the uniqueness of its natural landscape to incorporate an array of natural wool, cotton and linen yarns into her work.

Jenna, from Chanter Hill, Enniskillen, based her innovative design on the theme of adoration and a lot of her imagery and colour palette were derived from a trip to Paris. She took her inspiration from the architecture, stained glass windows and filigree at Montmartre and Notre Dame and used silk and lace combinations.

Melissa, from Maghera, was inspired by the Carnival – midnight blues and purples with flashes of brights were used as the base colour palette for lace knits and transparent floaty fabrics.

Orlagh, from Tassagh, Co Armagh, took her inspiration from the organic woodland environment and its wildlife. For her final design idea she focused on rich velvets and complimentary woolen knitwear.

Alison Gault, Course Director for Textile, Art, Design and Fashion said:“The University of Ulster’s success in this prestigious competition shows the exceptional diversity of talent among our students and the high standard of creative abilities.

“We are delighted to have four students in the final of the Golden Egg event. They have been given a great opportunity to have their outstanding efforts recognised in such an influential environment for newly emerging designers.”

Patricia McCrossan said the event gives young design talent an unrivalled opportunity for their work to be shown to a jury of leading fashion design experts.

“The Golden Egg Fashion Innovation Awards are unique in Ireland and are seen as providing a rite of passage for many of our top designers as they make their way up the rungs of the fashion ladder,” she continued.

“We have a fantastic track record to date with some of Ireland’s best known designers making their national debut at the Golden Fashion Innovation Awards.

“Our ‘Designer of the Year 2012’, Natalie B Coleman has enjoyed huge success since the show last year dressing Irish stars such as Kathryn Thomas, Sharon Corr, Charlene McKenna and Laura Whitmore.”

To celebrate the fourth year of the event, organisers are offering early bird tickets for €25. Tickets include pre-show drinks and canapÃ©s, goodie bags, seats at the awards ceremony and a glittering after-show party to start off the Easter weekend in style.

For more information or to buy tickets for the event, phone 00 35391 384350, log on to www.goldenegg.ie/events or search ‘Irish Fashion Innovation Awards’ on Facebook.

Caption: (L to r) University of Ulster students Rachael Aiken, Orlagh Murdoch, Melissa Gormley and Jenna Mulligan are through to the final of the prestigious Golden Egg Fashion Innovation Awards