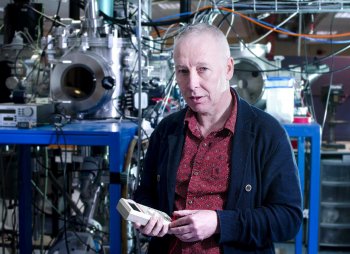 A new research project by scientists at the University of Ulster could revolutionise the way airborne bacteria is identified and the speed at which it is detected.

The School of Engineering at Jordanstown has received a major grant worth £600,000 from the Engineering and Physical Sciences Research Council (EPSRC) to explore the possibility of developing a portable, compact device that could immediately diagnose pathogens such as hospital superbugs.

The joint, three-year research project in collaboration with the University of Glasgow is worth £1m in total and if successful, may also transform the detection of pathogenic warfare agents such as anthrax and even extra-terrestrial life.

Professor Paul Maguire from the University’s Engineering Research Institute said: “We are looking at quite radical approaches to the serious challenge of instant or almost instant pathogen detection.

“Instead of trying to identify airborne bacteria by their microbiological properties alone, we will be looking at their precise physical structure in the hope that this will allow us to separate different strains of the target bacteria and become the basis for a rapid detection and early warning system.

“At present, standard laboratory culture techniques can require up to 48 hours delay for pathogen identification.

“Our multidisciplinary team includes physicists, microbiologists and electronic engineers who will be working on building a small proof of principle device to constantly monitor the air and issue an instant warning when it identifies the target bacteria it has been pre-programmed to detect.”

Viable, portable, immediate detection technology for pathogenic bacteria could have major impact in a hospital and public building environment, as a method of limiting airborne infection.

The development of a mobile, real-time detector would allow the source of any airborne outbreak to be traced and contained quickly.

It may also have an impact in the development of lightweight detectors for space missions searching for extra-terrestrial life and assist in the fight against international terrorism.

Added Professor Maguire: “The ongoing threat of pathogenic agent dispersal, whether chemical, nuclear or biological is a priority for governments worldwide.

“The static detection systems, set up in the USA in the wake of 9/11 can still take between six and 48 hours to identify a pathogen.

“Portable, compact, immediate, early-warning technology could limit the impact and greatly assist the management of any threat.

“Normally you don’t get physicists trying to detect bacteria, usually it is a microbiological problem, but we are coming at things from a different perspective and hopefully by sharing this challenge between physics, biology and engineering, we can make a significant advance on what is a longstanding and critical technological challenge.

“The theories that this research is based on have never been developed before and often radical scientific ideas can take up to 20 years to work, however, we will be trying to do things a bit quicker than that.

“We have three years to build a prototype and prove that identifying airborne pathogens by their physical properties will work.”

Director of the Engineering Research Institute, Professor Jim McLaughlin said: “This award from the is a reflection of the historic and strong tradition of engineering and the applied sciences at Jordanstown.

“In particular it is a reflection of the international status of our fast growing research capability with our Engineering Research Institute and the underpinning teaching of the School of Engineering.

“There will be many benefits to our wider research strands associated with Connected Health, Clean Technology, Nanotechnology and Tissue Engineering.”

CAPTION: Professor Paul Maguire from the University of Ulster