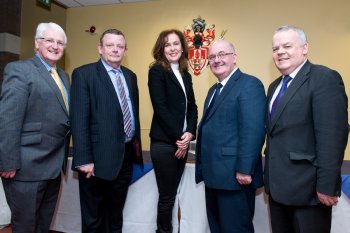 A concert of international music and dance was hosted at the University of Ulster’s Magee campus to celebrate Common Wealth Day 2013.

The event was organised by the Speaker of the Northern Ireland Assembly, Willie Hay MLA, in his role as the President of the Commonwealth Parliamentary Association, Northern Ireland Branch.

Featuring performances from Foyleview Special School, the South Asian Dance Academy and the Magwere African Band, the concert was hosted in Derry ~ Londonderry as part of the UK City of Culture celebrations.

Speaking at the event, Professor Deirdre Heenan, Provost (Magee & Coleraine) and Pro-Vice Chancellor (Communication), said: “It is very fitting that we are hosting this celebration to mark Commonwealth Day.

“The Commonwealth and the University are underpinned by many similar objectives such as creating opportunities to spread good ideas across geographical barriers, nurturing talent and encouraging collaboration.

“The theme of this year’s Commonwealth week ‘Opportunity through Enterprise’, is also particularly fitting for the University of Ulster as we believe passionately about providing opportunities for all who are able to take advantage of them. Inclusivity and creativity are two of our core values.”