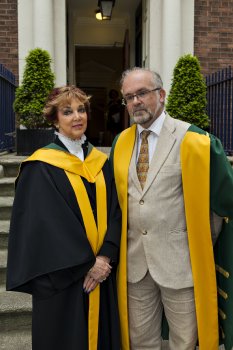 Educationalist Rosalind Pritchard has been elected as a member of the Royal Irish Academy.

The University of Ulster Professor of Education was honoured for her world-class contribution to the field of education theory.

Election to membership of the Royal Irish Academy is a public recognition of academic excellence and is the highest academic honour in Ireland.

Professor Pritchard’s areas of expertise are Comparative Education, Higher Education and the Teaching of English to Speakers of Other Languages.

She is a member of the Academy of Social Sciences and her most recent book is Neoliberal Developments in Higher Education: the United Kingdom and Germany (Peter Lang Publishing, 2011). Another will be forthcoming in 2013: Resilient Universities: Confronting Challenges in a Changing World.

Professor Pritchard is also a Senior Distinguished Research Fellow of the University of Ulster. Welcoming the appointment, Professor Pritchard said: “I am delighted to have achieved recognition of my work by the Royal Irish Academy, and consider it a great honour to have been admitted to membership. I look forward to serving the RIA.”

Professor Pritchard was admitted to the Royal Irish Academy alongside Susan Denham, Chief Justice of Ireland; Nuala O’Loan, former Northern Ireland Police Ombudsman; and Michael McElroy, who was one of Al Gore’s advisers on climate change.