Inspirational Student Nurse of the Year 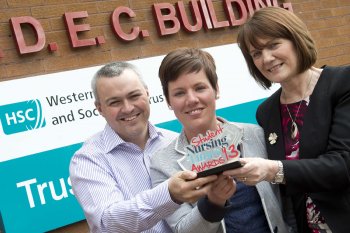 A University of Ulster student has been named “Most Inspirational Student Nurse of the Year” at a prestigious gala awards ceremony in London.

Carla McClintock was nominated for the ‘Nursing Times’ accolade after overcoming a life threatening illness and returning to nurse education despite suffering multi-organ failure.

The final-year Adult Nursing student was advised by doctors to reconsider her planned career in nursing after spending three months in intensive care and undergoing a lengthy and agonising period of rehabilitation.

Carla however, was determined to return to nursing, and after making a full recovery she recommenced her studies at Magee in 2009, six years after her initial trauma.

Carla’s training involved returning to undertake a six-week placement in the Intensive Care Unit (ICU) at Altnagelvin Area Hospital where she had spent so many critical months as a patient fighting for survival.

Despite the difficult memories this evoked for the Derry student, Carla threw herself into the challenge and used her own experiences to support the patients in ICU and help the staff gain a better insight in how best to support them.

He said: “I first met Carla in 2002 in my former role as a Lecturer in Nursing at the University of Ulster. I taught Carla in the initial stages of her pre-registration programme and she demonstrated a true commitment to her training.

“During the years of her recovery we kept in touch and I was delighted when Carla contacted me in 2009 to say that she was ready to recommence her studies.

“When she returned to ICU at Altnagelvin for a six-week placement she was determined to have a meaningful and insightful learning experience. Carla was in a relatively unique position where she was the ‘expert patient’ but also a developing nurse.

“The personal experiences she shared with staff have helped our team gain greater insight into how we can support patients who are critically ill and her journey will help us improve the support we offer our future patients.

Congratulating Carla on her achievement Deirdre McNamee Associate Head of the School of Nursing, University of Ulster, Magee, said: “By sharing her personal experiences, Carla has made an outstanding contribution to the development of greater understanding and awareness about the patient experience which has made a lasting impression with members of the health care team in practice.

“We are honoured that Carla has brought distinction to both herself and the University in this way.”

Now in the final year of her Adult Nursing degree programme, Carla - who has just returned from a placement at Alexandra Institute, in Greece – is due to graduate later this year.

She said: “When I was first nominated for this award I could not believe it and now, to have actually won it, is completely overwhelming.

“It is great to receive recognition of the tough personal journey that I have come through to reach this point. Without a doubt I could not have done it without the support from my family.

“Furthermore, the support that I have received from University of Ulster and especially Brian McFetridge, has been fantastic.

“I truly believe that my personal experience, although harrowing, has served to make me a better nurse and I only hope that my achievement inspires others- that through sheer determination and hard work- you can achieve your goals.”