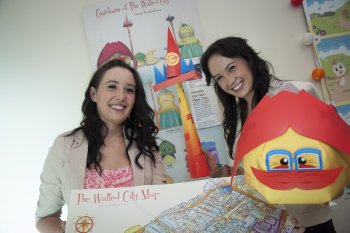 The School of Creative Arts & Technologies at the University of Ulster celebrated 25 years of design at Magee with its most successful end of year showto date.

The end of year show is the annual showcase event for undergraduate design students and features a wealth of creative talent. This year, for the first time ever, the show is being held off campus in the London Street gallery in the recently regenerated Cathedral Quarter inside the Walled City.

Dr Justin Magee, Course Director of the B.Des (Hons) degree in Design for Creative Practice, said felt it was very appropriate to have the end of year show in the newly opened London Street gallery.

The gallery - one of the Inner City’s Trust’s flagship projects inside the Walled City - has been gifted to the Culture Company for the duration of City of Culture 2013 as part of the Trust’s ongoing commitment to culturally led regeneration in the Cathedral Quarter.

“The London Street Gallery is an exceptional space dedicated to the arts community and, although it only opened in April,already it has become a hub of creative activity,” said Dr Magee.

He continued: “We were absolutely delighted when Noelle McAlinden, programme director for the London Street Gallery invited us to exhibit our end of year show year here.

“Celebrating our 25th anniversary as part of the City of Culture celebrations, within the Walled City, helps to profile the geographic importance of design to the economy – this echoes research by the Design Council.”

Noelle McAlinden said the end of year show was an excellent opportunity to celebrate the creativity and innovative practice of design students at the University of Ulster.

“Through the London street gallery City of Culture hopes to create a legacy of supporting emerging artists in a gallery setting, promoting creative exchange between arts, cultural, business, education and community centres.”

The show was opened by guest speaker Mark Nagurski, Director of CultureTECH who admitted he was ‘blown away by the students’ work.

Mark, who served as the City of Derry’s first Digital Champion, has supported several design activities over recent years as part of his commitment to fostering innovation through culture and technology.

"This is my third year to attend the Magee end of year design show and I've always enjoyed the quality of the work.

“In fact, we've often ended up working with some of the students that we meet at the end of year show. This year however, the quality of work has absolutely blown me away and we already have our eye on several projects which we would love to incorporate into the CultureTECH Festival this September. Expect big things from this year's class!"

The end of year show will remain open to the public from 10am to 4pm daily until Friday June 21. Visitors to the show will have an opportunity to meet with some of the final year students who are working on diverse projects as ‘designers in residence’ for the duration of the show.

Caption Twin sisters Caroline and Genevieve McCone from Armagh shows off Caroline's Augmented Reality map of Derry~Londonderry and some of the Paper Toys from Genevieve's "Children Paper Toy" project.