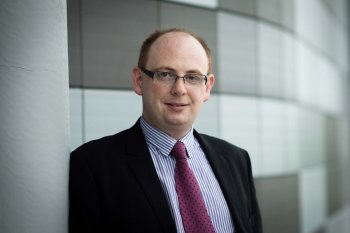 Dr David Barr, Head of the School of Modern Languages, who has been appointed to the WorldCALL Steering Committee

A University of Ulster academic is set to shape the future of computer assisted language learning.

Dr David Barr, Head of the School of Modern Languages, has been appointed as one of only seven international experts to sit on the WorldCALL Steering Committee.

The prestigious appointment was announced at the WorldCALL conference, organised by Ulster’s School of Modern Languages and hosted at the Scottish Exhibition and Conference Centre (SECC) in Glasgow, earlier this month.

It was the first time that the worldwide organisation has held its conference in Europe, which takes place every five years and has previously been held in Tokyo, Banff and Melbourne.

Commenting on his appointment Dr Barr said: “It is a true honour to be asked to sit on this international steering committee. To be one of only seven people in the world to be nominated to this role is a great privilege and underlines the international reputation of Ulster in the area of Computer-Assisted Language Learning.”

He added: “The WorldCALL conference has been a major success for the School of Modern Languages at Ulster with over 300 delegates from 42 countries attending over the course of three days.

“As a result of sponsorship from the University, we were also able to provide scholarship bursaries for thirteen language lecturers from Argentina, Belarus, Brasil, Colombia, Egypt, Ethiopia, India, Indonesia, Iran, Russia, Rwanda, Sri Lanka, Turkey and Venezuela to attend the conference.

“The funding allowed these delegates from under-served regions of the world to network with the world’s leading academics in the area and to learn about effective pedagogical practices for teaching languages.

“The scholarship recipients will now be equipped to lead change in their own institutions and will be responsible for spearheading the use of CALL and multimedia technologies in their respective institutions and, more widely, in their countries.”