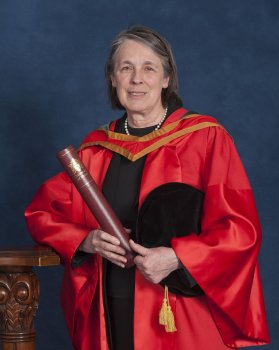 Leading Irish jurist The Hon Mrs Justice Susan Denham will today receive the honorary degree of Doctor of Laws (LLD) from the University of Ulster in recognition of her services to law nationally and internationally.

Mrs Justice Denham is the Chief Justice of the Supreme Court of Ireland, appointed by President of Ireland Mary McAleese on 25 July 2011. She is the first female to hold the position and is the longest-serving member of the court

A native of Dublin, she was educated at Trinity College, Dublin, the King’s Inns and the Law School of Columbia University in New York.

Her distinguished legal career saw her become a High Court judge in 1991 and in 1992 she was the first woman appointed to the Supreme Court.

A former Pro-Chancellor of the University of Dublin, Mrs Justice Denham was part of the Irish delegation which, with Holland and Belgium, established the European Network of Councils for the Judiciary (ENCJ), and she continues her involvement with this network.