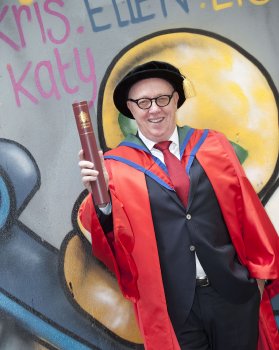 Leading international film-maker Terry George will today receive the honorarydegree of Doctor of Letters (DLitt) from the University of Ulster in recognitionof his services to Northern Ireland film.

His film career blossomed when he moved to the USA in 1981, after a turbulent youth which included a spell in the Maze prison.

Some Mother’s Son (1996) and In the Name of the Father (1993).He is an enthusiastic supporter of Northern Ireland’s burgeoning film industry.