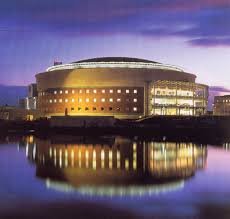 The University of Ulster’s graduation ceremonies, which began on the Coleraine campus earlier this week, today moved to Belfast’s ultra-modern Waterfront Hall, where they will continue for the remainder of the week.

Over the next three days, over 2400 students who studied at the University’s Jordanstown and Belfast campuses will receive awards ranging from diplomas to degrees and doctorates.

The Belfast ceremonies got underway this morning when students from the Faculty of Art, Design & the Built Environment and the Faculty of Computing & Engineering received their awards.

At the morning ceremony an honorary degrees is to be conferred on leading irish jurist Hon Mrs Justice Susan Denham (LLD) while at the afternoon ceremony film-maker Terry George receives the honorary degree of Doctor of Letters (DLitt) for services to the creative arts,