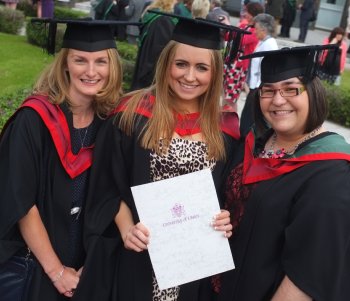 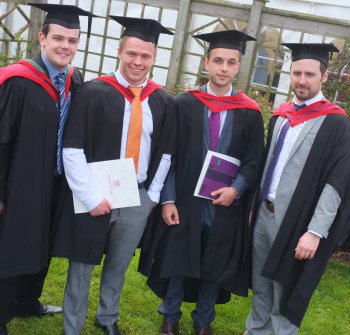 History was made this week at the University of Ulster’s summer graduations at Coleraine when the first ever cohort of MPharm students were awarded their degrees.

County Tyrone student Helen Edwards (22) graduated top of the class and, for good measure, collected four of the six awards available to her year group, including Best Pharmacy Practice Project.

Helen, who is the daughter of Joan and George Edwards from Caledon, is a past pupil of Royal School Dungannon and Minterburn Primary School.

When she opted to study Pharmacy at the University of Ulster’s Coleraine campus, she was following in the footsteps of her older sister Susanwho had studied nursing there a few years previously.

“I used to visit her when she was a student and just loved the area and when I had an opportunity to study pharmacy there myself, I jumped at it.

“I always wanted to be a pharmacist and just loved every minute of my time there,” she admitted.

As part of the MPharm degree, students complete a number of placements in different settings. Helen said she felt the placements were invaluable.

“They helped underpin the theory and gave us a much better understanding of the practicalities of pharmacy in the ‘real’ world.”

Helen added: “Studying pharmacy at the University of Ulster has provided me with the knowledge to be an excellent pharmacist and has also given me the confidence to know that if I set my mind to do anything, with hard work and commitment, I can achieve it.”

Following her graduation, Helen will take up a pre-registration post with Gordan’s Chemist in Armagh.

Congratulating Helen on her success, Professor Paul McCarron,Head of School of Pharmacy and Pharmaceutical Sciences said she managed to combine academic excellence with professional distinction.

“The MPharm undergraduate programme at Ulster continues to go from strength to strength since its introduction in September 2009. We have worked hard to create an ethos in Pharmacy based on both academic excellence and professionalism and Helen’s success is testimony to this.

All Ulster MPharm undergraduates complete placements with community and wholesale chemists, as well as in hospitals and with industry.

The class of 2013 have all secured places for their 12 month pre-registration training period and once this is completed, they can then register and practise as pharmacists.

Pharmacy graduates, Comghal McQuillan, Lurgan, Lewis Fullerton, Ballymena, Luke Speers, Ballymena and Damien Lappin, Armagh, who were among the first students ever to graduate from the University of Ulster, Coleraine with a Master of Pharmacy degree.