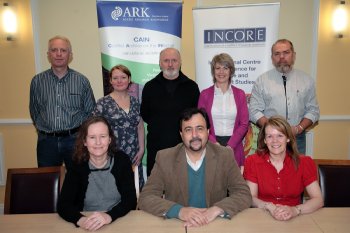 The University of Ulster is to establish a £1.2m digital archive project at its Magee campus.

Called 'Accounts of the Conflict' the project will be housed at the International Conflict Research Institute (INCORE), and will offer long-term storage and preservation of stories related to life in Northern Ireland and the border region during the period of the conflict.

Organisations, groups and individuals will be able to deposit digital copies of stories with the new archive.

The Accounts of the Conflict project has received £948,000 from the European Union’s PEACE lll programme, managed by the Special EU Programmes Body, with the balance being supplied from University resources.

It will link to the existing CAIN (Conflict Archive on the INternet) Web site which is the premier online resource containing a comprehensive collection of information on the conflict.

In addition to offering secure, long-term storage for digital copies of stories, the Accounts of the Conflict project will catalogue the work that has been carried out on story-telling in, and about, Northern Ireland.

INCORE staff will offer advice and assistance to any current story-telling project but will also be keen to hear from any organisation or group which had done story-telling work at any time in the past. Where permission can be obtained there will also be an opportunity for a selection of stories to be accessible on-line at a new Web site.

Welcome the investment, Professor Richard Barnett, Vice-Chancellor of the University of Ulster, said: “Part of the remit of the University of Ulster is to focus and deepen our contribution to the social and cultural development of Northern Ireland. Over many years, staff members of the university have been at the forefront of research on the conflict in the region. Accounts of the Conflict will complement that research and also be an important part of the legacy of ‘the Troubles’.”

In addition to building a large digital archive to store the stories, a web site will be designed to allow users to search for information about stories that have been compiled over many years. The website will also be designed to allow individuals or groups to deposit their own stories beyond 2014.

“This is an important development in the area of story-telling related to life in Northern Ireland and the border region during the conflict.While there has already been much good work done in story-telling, often it has been difficult to locate information about the stories that have been collected or to access the stories themselves.

"A central archive, based within the University of Ulster, will help to improve knowledge about the stories, and also assist in the dissemination of the material, where permissions have been granted.”

Professor Gillian Robinson, Director of ARK in INCORE who will co-ordinate the project said:

“Often smaller story-telling projects have not had the resources to allow wide access to the stories they collected.As many of the projects are also short lived, they have not been able to provide the long-term storage of the recorded stories.

"Both these problems can be overcome if existing and former story-telling projects are willing to work with INCORE.In addition it will be possible to draw on extracts of material from the CAIN Web site to provide background information for people consulting the stories.

"We hope many story-telling projects will consider depositing their materials in the new Accounts of the Conflict Archive and we look forward to working with them.”

For more information go to Accounts on CAIN