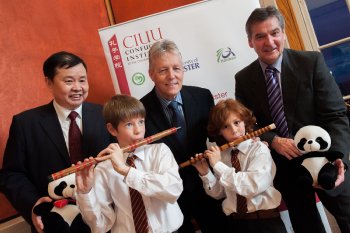 Five Ministers in the Northern Ireland Executive, including the First Minister Peter Robinson, have joined forces to show their support for the University of Ulster’s Confucius Classroom Hubs project.

They were welcoming a high-level Chinese delegation of academics, educationalists and diplomats to a event celebrating the launch of Confucius Institute Classroom Hubs in eight Northern Ireland schools.

The eight hub schools are:

The First Minister, Peter Robinson MLA, said: “Northern Ireland is proud of its growing relationship with China and the Executive places huge value in the important trading, cultural and educational links between China and Northern Ireland, made possible in large part to the valuable knowledge provided by the Confucius Institute.

“I welcome the establishment of the First Confucius Classroom Hubs in Northern Ireland and I commend the University of Ulster and the school hubs for the tremendous work they have undertaken to make this possible.

“These new classroom hubs are a fantastic way to ensure that from the youngest age and at every level of education, young people will be introduced to Chinese language and culture. I am determined to continue to grow our educational links with China and wish each of the eight Northern Ireland Confucius Institute Hub Schools every success."

Commenting on the presence of five NI Executive Ministers at the event, Education Minister John O’Dowd MLA, who also represented the deputy First Minister, Martin McGuinness MLA, said: “The fact we’re all here shows the importance we all place on the Confucius Institute and on building on the good relations between the Executive and the Chinese government.

"Today we are celebrating the continued growth of the Confucius Institute and of the Classroom Hubs, something that will be of benefit not only to our local economy, but also to our society.

“This project has grasped the imagination of our educators and of our schools and I want to thank everyone involved in the Confucius Institute for their dedication, their innovation, and for ensuring that our young people and societies have an opportunity to learn from each other’.

Minister for Employment and Learning, Dr Stephen Farry MLA said: “I commend the Confucius Institute on the opening of eight classroom hubs. The excellent ongoing work between the University of Ulster, South West College and the Confucius Institute will help to enhance the global reputation of the Higher and Further Education sectors in Northern Ireland. My Department is committed to maximising internationaleducation partnerships andculturalexchange opportunities whichwill benefit our local economy.”

"I want to give my warmest congratulations to each of the eight NI Confucius Institute Hub schools, and wish them every success as they embark on a new relationship between young people here and young people in China.”

His colleague Junior Minister Jennifer McCann MLA added: "Our relationship with China is one which we deeply value and are keen to strengthen.

"I commend The Confucius Institute, the University of Ulster and all the schools involved. The eight new hubs will not only promote teaching and understanding of the Chinese language but contribute to our economic, social and cultural development.”

Hubei Normal University is a key partner in the delivery of the Confucius Classroom project in Northern Ireland.

Its Vice-Chancellor, Professor Xianzhi Xiang, who was making his third visit to Northern Ireland, said: “I am very proud to represent Hubei Normal University at this launch. As the relationship between the University of Ulster and Hubei has become closer over the years, new areas of co-operation have been developed. Today’s event further strengthens those links.