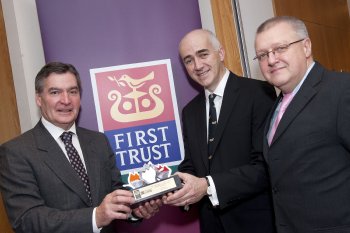 The First Trust Bank/University of Ulster Distinguished Graduate of the Year Award is made each year to an alumnus/alumna of the University ‘in recognition of outstanding achievement in their chosen field’.

He has also studied in Europe, and was assigned to Bombardier Aerospace in Montreal from 1997-1999 as Director of Engineering.

He is a Management Board member at Northern Ireland Advanced Composites and Engineering Centre (NIACE), a Board member of the NI Advanced Engineering Competence Centre, the Irish Composites Competence Centre and the Irish Centre for Manufacturing Research. More recently, he joined the Steering Committee of the Aerospace, Aviation & Defence KTN and he is currently chairing the working group that is setting up the UK’s Aerospace Technology Institute.

For over ten years, Gavin has been integrating his research activities with the Engineering Research Institute and in particular the University’s Composite Centre (ECRE). His strong interests in materials and his passion for education and in particular teaching the correct skills has led him to major roles within DEL, DETI and more recently MATRIX.

He has chaired the Advanced Manufacturing Horizon Panel of MATRIX and currently sits on the MATRIX Panel. His leadership qualities have led to the launch of the joint Ulster-QUB Northern Ireland Advanced Composites and Engineering Centre (NIACE), which opened in January 2012.

Passionate about promoting engineering at schools and University level, Gavin has led numerous STEM, MATRIX and various promotional initiatives including the Festival of Science at the Northern Ireland Science Park.

Gavin also serves as District Commissioner for Scouts in South East Down, as Chairman of the Patients Participation Group at Saintfield Health Centre, and is involved in motorsport – including competing in and organising car rallies – an interest he first developed as an undergraduate at Jordanstown.