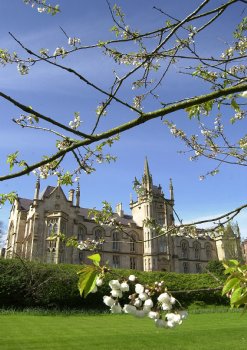 The University of Ulster’s Magee campus will play host to a series of events as part of the Fleadh Cheoil na hÃ‰ireann next week.

The School of Irish Language and Literature will present two Irish language lectures as part of the Fleadh programme.

On Wednesday 14th August Dr Maxim Fomin will speak on the topic of ScÃ©alta na Farraige agus an tOsnÃ¡dÃºr: Ceol agus Fuaimeanna ('Stories of the Sea and the Supernatural: Music and Sounds').

On Friday 16th August Dr Peter Smith will discuss the Irish-language song tradition of Mid and North Tyrone as it existed in the late nineteenth to early twentieth-century in his talk, AmhrÃ¡naÃ­ocht LÃ¡r agus Thuaisceart ThÃ­r Eoghain.

Both academics are members of the Irish and Celtic Studies Research Institute and contribute to various taught programmes within the School of Irish Language and Literature at the Magee campus.

A vast number of recordings and materials have been collated as part of this project and a significant portion focus on the supernatural and unearthly beings.

Dr Fomin will discuss the music and sounds which are associated with the folklore of the seas around Ireland and Scotland.

Dr Smith will consider the great collectors, the singers and their songs before concluding with some reflections on his own song-collecting experience during the compilation of Songs from the Sperrins: Traditional Singing from Mid & North Tyrone (Derry: Beaghmore Publications, 2009).

In addition, he will discuss the parallel tradition of English-language singing which developed in the late nineteenth-century.

Dr Malachy Ã“ NÃ©ill, Head of the School of Irish Language and Literature, said: "Dr Smith and Dr Fomin are internationally recognised as experts in these areas of research. This is a unique contribution by our staff at the Magee campus to the wonderful programme of Fleadh Cheoil na hÃ‰ireann this year."

Professor Ailbhe Ã“ CorrÃ¡in, Director of the Irish and Celtic Studies Research Institute welcomed this opportunity to showcase the Institute’s research in the area of folklore and folk music: "The cardinal aim of our research is that it should benefit the community in which we live and we are delighted that two of our top researchers, Dr. Fomin and Dr. Smith, will share their work with the wider community during this nationally important festival.

Both talks will be delivered in Irish and will take place in Room MD007 at 7.30pm each evening. A drinks reception will follow in Martha Magee's.