TV Series Explores Legacy of the Celts in Europe 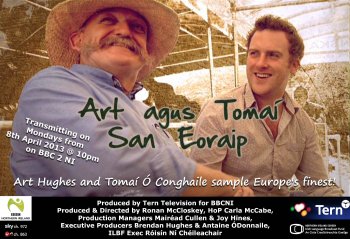 University of Ulster Irish scholar, Dr Art Hughes, will star in new documentary exploring the legacy of the Celts in Europe.

Their journey embraces some of Europe’s most colourful Celtic festivals including the Festival de Cornouaille in Brittany, Altburg Festival in Germany, the Festa Major, in Vilafranca, Catalonia and the Trumpet Festival in the tiny village of Guca, Serbia, which attracts over half a million people each year.

Dr Hughes, from the School of Irish Language and Literature, said: “One of my students, Ronan McCloskey, a documentary maker, asked me if I would take part in a new programme he was producing exploring Celtic culture, music, language and tradition across Europe.

“Given my research background in the university’s Irish Celtic Studies Research Institute, I was delighted to take up the opportunity.

“Being involved in the series has been a fascinating and exciting experience. It was refreshing to see that people and cultures no matter where you go will always celebrate and their traditions through music, language and dance and song.”

‘Art agus TomaÃ­ san Eoraip’ will be transmitted on Mondays at 10pm from Monday 8 April on BBC2 Northern Ireland.