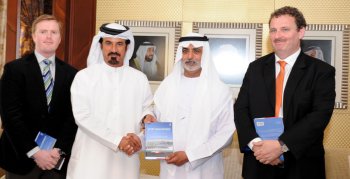 The first book to examine the burgeoning growth of sport management in the Middle East, co-authored by a University of Ulster academic, has been launched by a Government minister in the United Arab Emirates.

The University of Ulster academic explained: “The book reflects the broadly accepted pre-eminence of the Middle East region in the global sports industry.

“The importance of sport in profiling the Middle East globally is now widely acknowledged.

“World leading events in the UAE, including the Dubai World Cup, Etihad Airways Formula 1 Grand Prix and a host of major golf and tennis events, as well as the forthcoming FIFA World Cup to be staged in Qatar in 2022, have placed the region at the forefront of the sport, event and tourism sectors worldwide.”

Dr Hassan, who is also based at the Sport and Exercise Sciences Research Institute on the Jordanstown campus, added: “The University of Ulster’s ties in the UAE continue to grow with the launch of a BSc (Hons) Applied Sport Management, to be delivered at the Higher Colleges of Technology Men’s College in Abu Dhabi later this year.

Also speaking at the launch Dr Ben Sulayem said the book should be understood as part of a broader contribution sporting federations could make to society.

He said: “We hope that this book will encourage the next generation of Arabs to demonstrate an evidence-based approach to their work and ensure the region’s position internationally in the vanguard of sporting excellence.”

The new book was published by the leading academic publishers, Routledge.