Flying the Digital Flag for Ulster 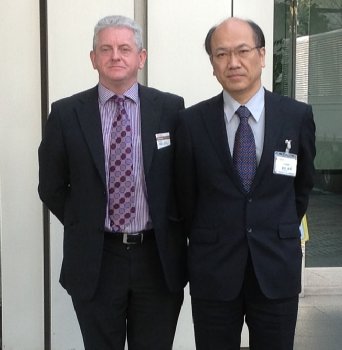 The G8 Summit in Co Fermanagh in June this year will present an unrivalled opportunity to showcase Northern Ireland’s unique position as an International Digital Hub to potential investors, according to University of Ulster Telecommunications Engineering expert, Professor Gerard Parr.

Professor Parr said the completion of Project KELVIN – the high-speed trans-Atlantic telecommunications fibre connection which is part of the global submarine fibre network - could see Northern Ireland become established as a global centre for Cloud Computing technologies with tremendous opportunities for the research in the aerospace, pharmaceutical, supply chain, financial and creative media sectors, both nationally and internationally.

“Northern Ireland, indeed the entire island of Ireland, has a unique story to tell potential investors: a winning combination of high speed connectivity and research capability and we need to make the most of it,” Professor Parr said.

“On the North Coast, we are strategically positioned to take leverage from the existence of Project KELVIN to take advantage of the low latency it affords, particularly adjacent to our Coleraine campus.

“This low-latency provides the high-speed that many companies require to service customers where every second counts. That is a very strong pull factor for global ICT and data centre companies interested in investing in Europe,” he said.

The European Union is represented at the G8 by the president of the European Commission and by the leader of the country that holds the EU presidency who is currently the Irish Republic's Taoiseach Enda Kenny.

When the UK took over the one-year Presidency of the G8 on January 1, Prime Minister David Cameron announced that the focus of the G8 would be on three key areas: open economies, open governments and open societies.

Against this backdrop, Professor Parr said international trade and investment were the key to stimulating economic growth and ICT, with advanced high speed digital connectivity having a significant role to play in realising these ambitions beyond the G8.

Earlier this year Professor Parr who is part of Ulster’s Information and Communications Engineering Research Group, met a delegation of major Japanese companies who travelled to Northern Ireland to assess investment opportunities here. The Japanese delegation was led by the Japanese Ambassador to London His Excellency Keiichi Hayashi.

As a follow-up, he was subsequently invited to Japan by InvestNI to meet representatives from the technology companies at a major UK Trade and Investment seminar entitled ‘Cloud Computing and Big Data in the UK - Opportunities for Japanese Companies’.

Professor Parr used the opportunity to showcase the University of Ulster’s research capability in Cloud Computing Technologies to Japanese businesses.

The event – which was attended by senior representatives of around 140 of Japan’s top technology companies and senior officials from the Japanese government - was hosted by Tim Hitchens, British Ambassador to Japan at his residence in Tokyo.

According to the Coleraine -based academic, the Japanese companies were very impressed with what they saw and there was significant interest in Northern Ireland as a strategic gateway between Europe and North America.

“The provision of and demand for Cloud Computing services is opening up exciting new business opportunities around the world and the Japanese were very keen to learn more about our research.

Professor Parr explained: "Essentially, Cloud Computing, which is also known as Utility Computing, is a ‘pay-as-you-go’ model for outsourced computing resources where the headaches and costs or purchasing and maintaining expensive equipment are reduced or removed completely from the user.

Professor Parr’s research in telecommunications is internationally recognised and he has been invited to advise the US Government on how to develop collaborative research links in science and engineering projects with India.

He is the UK’s Principal Investigator for a multi-million pound consortium of nine research-leading UK universities and seven of the top research Institutes of Technology in India and his current research interests are involved with Utility Computing for all sectors of the economy.

The £20 million project will improve the quality of life of millions of people in India and has been held up as an example of best practice on International Development by the UK and the United States Government. The project will support research into next generation telecommunications networks and the future development of state-of-the-art platforms and applications to carry voice, video and data on the Internet.