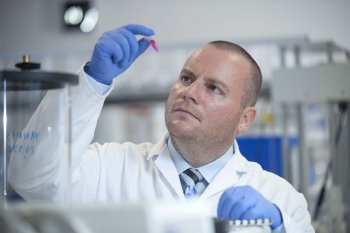 Leading University of Ulster academic, John Callan has been appointed Professor of Pharmacywith the School of Biomedical Sciences at Coleraine.

A native of Strabane, Professor Callan has built a distinguished career in pharmaceutical science, becoming a respected researcher and author in the field.

His appointment to the rank of Professor recognises his outstanding contribution to his academic field of endeavor.

Educated at St Columbs College, Derry~Londonderry, Professor Callan received his doctorate in chemistry from QUB. He joined the University of Ulster in 2009 as senior lecturer in pharmacy.

He is currently working onprojects exploring optical-based sensors for the non-invasive detection of important blood analytes such as sodium and glucose, and new drug conjugates for the treatment of deep-seated cancerous tumours using Photodynamic and Sonodynamic Therapy.

He has received more than £800,000 to support his research from various sources such as the EPSRC, the Leverhulme Trust and local industry.

Commenting on his appointment, Professor Callan said: “I am delighted to receive this appointment and thank all those who have supported my work to date, with particular thanks to the BMSRI and the University of Ulster.”