Peace Walls 'As Contentious As Ever' Ulster Research 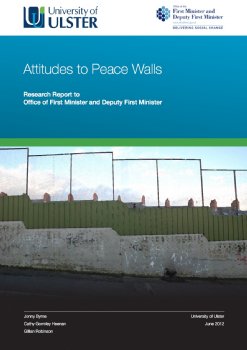 Almost 50 years since the first peace wall was erected in Northern Ireland - and despite the gains of the peace process and the return of devolved government to Northern Ireland, more than two out of three people living near them cannot imagine a time when the walls will no longer be necessary.

And among the general public in Northern Ireland, almost 4 ouit of five people say that segregation of communities is common – even where there are no peace walls to keep people apart.

Those are just some of the stark findings from a major in-depth study of public attitudes to Northern Ireland’s peace walls by researchers from the University of Ulster.

Funded by OFMDFM and carried out by Dr Jonny Byrne and Dr Cathy Gormley-Heenan of the University's Institute for Research in Social Sciences with Professor Gillian Robinson of INCORE which is based at Magee, the survey’s key findings are given below.

Among the general population, the survey found:

This research was the first time that the general population in Northern Ireland as well as those that live closest to the various peace walls were asked for their views on a range of issues, including the impact of peace walls on people’s lives and attitudes towards their potential removal and/or transformation. 1451 people across Northern Ireland took part in the surveys.

However, the survey findings suggest that greater engagement with the communities, a wider dissemination of ongoing government activities and initiatives and a clearer articulation of what a society without walls might look like could collectively contribute to a more informed public debate on these sensitive issues.

Report author Dr. Gormley-Heenan said: “64% of the general population believe that peace walls should be a big priority for the Northern Ireland government – and 63% of peace wall residents would like to know more about initiatives and discussions about the peace walls. This shows that there is a huge public appetite for greater engagement between the communities and those responsible for peace walls."

Dr Gormley-Heenan added: “There was considerable confusion among peace walls residents about who exactly was responsible for decision-making around the walls in their areas – only 4% correctly identified that the responsibility actually lies with the Department of Justice."

For co-author Dr Jonny Byrne, “It is important to recognise that 69% of those that live closest to peace walls believe that they are still necessary – due to the continuing potential for violence. Although 58% would like to see the walls come down now or at some point in the future, only 38% could actually envisage a time when this would happen”.

Professor Gillian Robinson said: “This research builds on earlier work by Dr Byrne, which looked at how people interpreted peace walls and the factors that influenced their views.

“This research further validates his previous findings that difference exists in the attitudes of Catholic and Protestant peace wall respondents. This difference is particularly around issues of how the peace walls residents feel they can celebrate their culture, their sense of identity and the protection of their communities”.

The Northern Ireland Executive’s current Programme for Government (2011-15) has listed as one of its key commitments under priority 4 to ‘actively seek local agreement to reduce the number of ‘peace walls', and they expect to see a reduction in the number of interface structures by 2014/15.