Chancellor James Nesbitt In Conversation At The Riverside Theatre 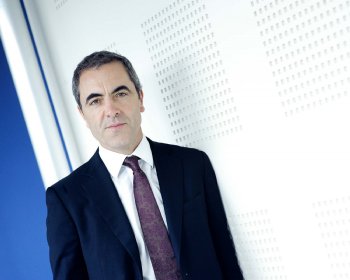 The Chancellor of the University of Ulster, James Nesbitt will be helping celebrate the Riverside Theatre’s 35th birthday in Coleraine, with an evening of conversation and anecdotes about his life and career.

The actor, who was born in Ballymena and grew up in Coleraine, has been a local hero since he shot to fame in the 1998 television series, ‘Cold Feet’.

He will be chatting at the Riverside Theatre, where he took his first steps towards an acting career, to Dr Kevin De Ornellas from the University’s School of English and History on November 6 and will answer questions from members of the audience.

Nesbitt, who is one of the stars of Peter Jackson’s ‘The Hobbit’ movie trilogy and is back on our TV screens in the medical drama, ‘Monroe’, began his acting career as a member of the Riverside Youth Theatre in 1978.

The theatre holds another special memory for him as he was installed as the University of Ulster’s Chancellor in a ceremony at the venue, two years ago. It’s a role he takes very seriously.

In a recent interview with The Daily Telegraph, he said: “Accepting the role of University of Ulster Chancellor felt very important to me. These are difficult times for universities and I’m part of a group who is lobbying local government to get people into tertiary education who wouldn’t normally have the opportunity.”

Speaking about his appearance at the Riverside next month, James Nesbitt said: “It is always a pleasure to come back to the Riverside and particularly so in this 35th anniversary year.

“I could not have imagined when I first stepped out on the stage at the Riverside that I would return some day as Chancellor of the University and I am truly honoured by that. I am looking forward to a memorable evening on 6 November.”

Theatre manager Jeremy Lewis said: “It’s a huge privilege to celebrate Riverside’s 35th Birthday alongside James Nesbitt, especially as Jimmy and I both began our careers with the theatre at the same time - December 1978.

“Jimmy was at that time a 13-year-old pupil at Coleraine Academical Institution and I had just been appointed Theatre Manager. I can still remember his audition for the musical ‘Oliver’, where he sang most of ‘Bohemian Rhapsody’ unaccompanied, on the Riverside stage.

“Unsurprisingly, he landed the leading juvenile role in the show – The Artful Dodger – and went on to perform in several further Riverside productions between then and leaving school.

“This event will be a fantastic chance for an audience to celebrate the Riverside’s 35th birthday and to hear all about the success and further development of Jimmy’s career and Jimmy himself.”

The University of Ulster commissioned Riverside Theatre during the 1970s, at the height of the Troubles. At that time, there were no other theatres open and operating outside of Belfast.

The University campus was an ideal spot with its landscaped, picturesque grounds and ample parking space.

One of Europe’s leading designers, Peter Moro, who was contracted to design a theatre for the University and for the citizens of Coleraine.

Within a few months of opening, Riverside won the prestigious Architect’s Award for one of the UK’s best public design features of 1977.

Riverside remains one of the creational gems of the late Peter Moro. His other designs include the Royal Festival Hall, the Nottingham Playhouse, the Theatre Royal at Plymouth and the University Theatre at Hull.

Riverside has had long established links with some of the best Irish, British, European and American theatre companies. The Abbey Theatre from Dublin, London’s Royal National Theatre, all of Ireland’s major touring companies and groups from France, Belgium, Africa and North America have performed there.

Many of today’s hottest stars of Irish, British and International stage, screen and television began their careers at the Riverside.

The best known of these is Coleraine actor James Nesbitt, an early member of Riverside Youth Theatre.

Zoe Seaton, Artistic Director of the Big Telly Theatre Company, began as a child actor in Riverside and a founder member of its first Youth Theatre, Upstage Downstage.

Critically acclaimed visual artist and book-illustrator, Stephen Brown performed as a child actor in several Riverside productions during the 70s.

A young Liam Neeson performed there during the early Eighties. Stephen Fry, Hugh Laurie and Emma Thompson were all unknown, but regular visitors then too, having just graduated from the Cambridge Footlights.

Briana Corrigan, formerly a singer and recording artist with rock band The Beautiful South, began as a Riverside child actor. Countless stars of major television soaps, such as Coronation Street, Emmerdale, EastEnders and Brookside have all appeared here through the years and keep in touch to this day.

Legendary Belfast export Van Morrison recorded a concert on the main stage for UTV during the 90s, which remains as the highlight of Riverside's music promotions.