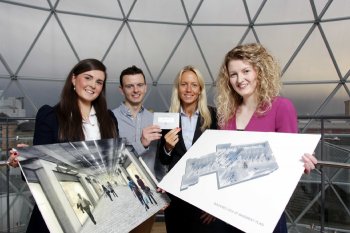 University of Ulster architecture students have created a unique design proposal, which is being considered for a prime 40,000 square feet retail unit in Belfast’s largest shopping centre.

The massive basement unit located below the Ann Street entrance to Victoria Square is currently unoccupied but the owners, Commerz Real, created a unique ‘Reface the Base’ competition, inviting local students to submit plans as to how the space could be used.

After a lengthy judging process overseen by leading retail and architecture experts, an innovative plan submitted by University of Ulster architecture students Sarah Mitchell, William Brewster and Carrie Gillespie was declared the winner.

The judges hailed the design proposal, which includes features such as smaller retail units aimed at independent retailers; a novel amphitheatre for concerts and live performances; a catwalk for fashion events; a children’s play area, crÃ¨che and bowling alley, for its creative use of the space.

University of Ulster Professor in Urban Planning and Property Development, Jim Berry said: “The Reface the Base competition has providedstudents in the Faculty of Art, Design and the Built Environment with the opportunity to bring flair, innovation and creativity to the design of an interesting space in the basement of the Victoria Square Complex.

“This has given them a fantastic platform to showcase their creative abilities, by coming up with innovative ideas which could potentially enhance the role and function of Belfast city centre as a retail, business, cultural and entertainment hub.

“It is also an excellent example of how our students have been able to meet the expectations of such a high profile company as the German-based Commerz Real which owns and operates Victoria Square.

“This competition is significant in promoting the academic/professional partnership-led model, which the Universityof Ulster considers important in facilitating the student learning experience.”

Officials at Commerz Real were so impressed by the students’ plans that they have agreed to carry out a feasibility study on the design proposal, which could potentially see the project brought to fruition in Victoria Square.

Speaking on behalf of the students at a presentation event in Victoria Square, Carrie Gillespie said: “We are delighted to have been named the winners of the Reface the Base competition and are so thankful to Commerz Real, Victoria Square, University of Ulster and all of the competition partners for giving us this unique opportunity to use our design skills in a landmark building at the heart of the business life of Belfast."

Aline Djaider, UK real estate manager, Commerz Real AG commented: “The Reface the Base competition offered an exceptional opportunity for Northern Ireland’s next generation of architecture students to get their teeth into the real world of retail design.

"We were impressed by all of the plans submitted but Sarah, William and Carrie’s proposal stood out as a highly imaginative concept, which gave great consideration to how a significant space such as this could be used for commercial benefit, whilst adding to the retail mix of Victoria Square."