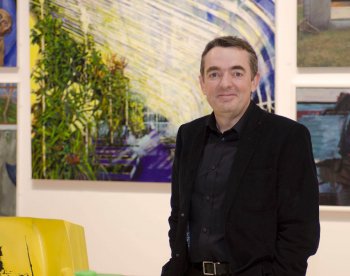 One of Ireland’s most prominent photographersand a University of Ulster academic,ProfessorPaul Seawright, hasbeen appointedVice President of the Royal Ulster Academy of Arts.

The announcement was madelast night (Thursday)at the opening of the RUA’s annual exhibition – one of the most anticipated events in Northern Ireland’s arts calendar.

Professor Seawright said:"I am excited to be leading the Royal Ulster Academy alongside newly elected president and University of Ulster graduate Colin Davidson. The Academyseeks to represent the best of art in Northern Ireland and our mission to modernise and reinvigorate its activities in our new city centre home is our priority."

Professor Seawright wasalso this weekappointedHead of the School of Art and Design at the University of Ulster.

Hesaid:“It’s an incredible honour to lead an art school with such an important history.

"It is the oldest school in the University and has made a significant contribution to the social and cultural life of Northern Ireland for generations.

“These are exciting times for the School of Art and Design as plans advance to consolidate provision in the University Greater Belfast Development, bringing a whole new community of learners into contact with the School.

“We will continue to innovate and respond to the developing needs of the cultural and creative economy of Northern Ireland.

"Our graduates are not simply artists and designers; they are innovators, entrepreneurs, problem solvers, creative thinkers and many go on to become distinguished leaders in education and the creative industries.”

Paul, who was born in Belfast,was appointedProfessor of Photography to establish undergraduate, post-graduate and research degree provision at Ulster in January 2007.Previously,he was Dean of Art and Design at the University of Wales, Newport where he also founded the European Centre for Photographic Research.

He is a Fellow of the Royal Photographic Society and Royal Society of Arts Manufacture and commerce.He has been a member of the Board of the Arts Council of Northern Ireland since 2007.

In 2002, he was commissioned by the Imperial War Museum London as War Artist for Afghanistan and his photographs of battlesites and minefields have subsequently been exhibited in North America, Canada, Ireland, Spain, France, Germany, Korea,Japan and China.

In 2003, he represented Wales at the prestigious Venice Biennale of Art and in 1997 won the Irish Museum of Modern Art/Glen Dimplex Prize for a major contribution to Irish art. The National Media Museum exhibited a major survey of his work from the past20years, curated by the FotoMuseum Antwerp, Belgium in 2007. In 2008 he was commissioned by MAXXI the Museum of Contemporary Art, Rome, to make new work in Northern Italy.

The Folkwang Museum in Essen exhibitedInvisible Cities, works made in post-colonial cities throughout sub-Saharan Africa in 2011. Photographic works from Nigeria and Zambia will be exhibited in January 2013 inChanging States: Contemporary Irish Art and The Francis Bacon Studio,a major exhibition curated by the Irish Museum of Modern Art to mark Ireland's Presidency of the Council of the European Union.