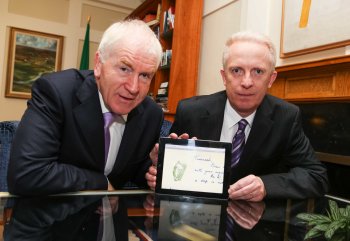 Irish Government documents which shed light on the start of Northern Ireland’s Troubles have been published online on the University of Ulster’s CAIN (Conflict Archive on the Internet) website.

The Irish Government’s Minister for Arts, Heritage and the Gaeltacht, Jimmy Deenihan launched a range of digitised archival documents relating to the conflict at an event in Dublin today.

Staff from the University of Ulster and the National Archives, Ireland (NAI) have been working together on a small pilot project to provide free access to Irish public records relating to the early years of the Troubles.

They can now be accessed at http://cain.ulster.ac.uk/nai/.

The documents include Irish Government records from the period, 1965-’69 and cover a range of events, including the meeting between Northern Ireland Prime Minister Terence O’Neill and Taoiseach Sean Lemass in January 1965 and the growing unrest on the streets of Northern Ireland in August 1969.

The items selected have been drawn from material which is already in the public domain, having been published under the ‘30 year rule’ – the timeframe within which official documents are kept from the public gaze.

The site provides an extensive range of information and source material on the conflict and politics of Northern Ireland from 1968 to the present day (see http://cain.ulster.ac.uk).

Minister Deenihan told the launch event in Dublin: “These records provide a valuable online digital resource for researchers looking for information on the conflict and politics of Northern Ireland during this period.

“This resource will, I have no doubt, contribute to a greater understanding of the conflict in Northern Ireland. Primary source documents, particularly those contained in the archives of Irish Government departments, provide an insight into the official response to the unfolding events in Northern Ireland in the 1960s at a time of great political turmoil.

“This resource will be available to students of Irish history at all levels as well as to the general public. CAIN in the University of Ulster and the National Archives are to be congratulated for this initiative, which demonstrates once again how modern ICT can be deployed to inform and educate as widely as possible”.

Dr Brendan Lynn, CAIN Deputy Director, stated: “We are delighted to cooperate with the NAI in supplementing the existing resources on CAIN. It has also allowed CAIN to pursue one of its long-term objectives of working with individuals, groups or organisations with relevant material to make digital versions of their materials more accessible to a wider audience.

“The information is easily available and free of charge. It will be of great use to students, researchers, teachers and lecturers or to anyone with an interest in the political and social history of Northern Ireland.”

Frances McGee, Acting Director of National Archives, Ireland added: “This initiative makes available, via the Internet, a selection of digital copies of historic documents relating to the conflict in Northern Ireland that are contained in the archives of the Irish government.

“As the official repository for the archival records of government departments of the modern Irish State, the National Archives holds a significant corpus of original, high quality records relating to the conflict in Northern Ireland, which contain valuable evidence of interaction between government officials, both North and South, and of bi-lateral contact between governments in Dublin and London.

“We welcome this initiative which allows the National Archives to gain a wider profile among a community of academic users.”

The aim of this pilot project, called ‘NAI Records on CAIN’, was to make a limited selection of material released by the NAI under its ‘Annual Release Scheme’, available to a wider audience.

It is hoped that the project will develop further in the future to allow a wider selection of materials to be made available. This collection is the latest resource to be added to the continually expanding materials available on CAIN – the internationally recognised resource on the Northern Ireland Troubles.

CAPTION:Pictured at the launch in Dublin today are Dr Brendan Lynn, CAIN Deputy Director and Irish Minister for Arts, Heritage and the Gaeltacht, Jimmy Deenihan

The CAIN website provides an extensive range of information and source material on the conflict and politics of Northern Ireland from 1968 to the present day. The site is used by a worldwide audience and has received over 16 million visits since it was launched in March 1997.

CAIN is based within INCORE (International Conflict Research) at the University of Ulster.

CAIN is a component of ARK (Access Research Knowledge, http://www.ark.ac.uk/) a resource providing access to social and political material on Northern Ireland that inform social and political debate in the region and raises the profile of social science research. ARK is based within the University of Ulster and Queen’s University, Belfast.

The National Archives, Ireland occupies a key position in the cultural and intellectual life of the nation, holding the records of the modern Irish State which document its historical evolution and the creation of its national identity. In keeping with its Mission Statement, the National Archives, Ireland secures the preservation of records relating to Ireland which warrant preservation as archives and ensure that appropriate arrangements are made for public access to archives. The holdings of the National Archives, Ireland relate to all parts of Ireland and have enormous research potential as they provide essential primary source material for people seeking to understand the political, economic and social forces which have shaped the nation. The records also permit the study of Government policy and encourage greater use of archival heritage by the general public.