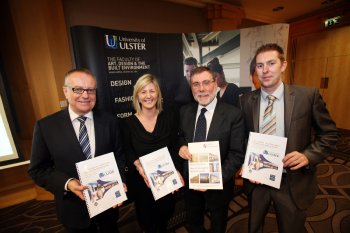 Investment in new social housing will help drive Northern Ireland’s economy out of the recession, a University of Ulster academic has claimed.

Professor of Housing, Paddy Gray was commenting at a conference on housing policy in Belfast, organised by the School of the Built Environment, which was attended by Housing Ministers from both sides of the border.

He told delegates: “It has never been so important to think about the long term future of housing in Ireland,both north and south of the border.

“We are witnessing rising numbers of people on social housingwaiting lists,a lack of development in new housing due to the slump in the construction industry and heightened concern amongst first time buyers, who are unable to get a foot on the property ladder due toalack of finance packages.

“Investment in social and affordable housing is critical to the economy and the health and well-being of citizens here in Northern Ireland.”

The Minister for Social Development at Stormont, Nelson McCausland alsotold the conference in Belfast’s Hilton Hotel that the housing market could play an important roleinsupporting economic growth.

“My recently launched housing strategy, ‘Facing the Future’,clearly sets out the important role the housing market can play in economic development and therefore job creation,” he said.

“The strategy sets out how we can create the right conditions to grow a sustainable housing market, provide support for individuals and families and get the structures in place that will deliver for future generations.

“The programme of reforms to the welfare system that I recently introduced to the Assembly will help those who can work to return to work, while providing support forthose who continue to need it.”

Minister McCausland spoke of how thestrategy addressedthe implications of the welfare reforms on those in the social and private rented housing sectors.

“The strategy has five key themes – ensuring access to decent, affordable, sustainable homes across all tenures; meeting housing needs and supporting the most vulnerable; housing and welfare reform; driving regeneration and sustaining communities through housingand getting the structures right,”he said.

The impact of the Welfare Reform Bill on the housing needs of low income homes is another one of the topics under discussion at the two day conference entitled‘Transitions and Transformations in Housing: Embracing Change and Promoting Innovative Housing Policy and Practice’.

Housing and policy experts arediscussing innovative funding opportunities for developing social and affordable housing as well as assessing how the policy landscape has rapidly evolved in recent years.

They will also examine theneed to invest in social housing to aid our economicrecovery.

The conference is looking at housing strategies in thedevolved regions of the UK andhow housing and support programmes aredeliveredfor households with complex needs.

Speakers and delegates are from across the UK and Ireland and it is also beingaddressed byJan O’Sullivan TD, IrishMinister of State, Department of Environment, Community and Local Government with special responsibility for Housing and Planning.

ConferenceCo-organiser andUniversity of UlsterLecturer in Housing Studies, Peter Shankssaid delegates would be examining how housing market conditions and the broader economic situation are intrinsically linked.

“Investment in housing boosts the economy and yields more jobs than other capital investment programmes. It also sustains jobs elsewhere in the economy,” heexplained.

“Now is the perfect time to increase investment in social and affordable housing as land and construction costs have fallen sharply.

“Such investment would decrease housing stress and homelessness as well as reduce pressures on other government spending budgets such as health, education and criminal justice.”

Ian Elliott, Chief Executive of Oaklee Homes Group the principal sponsor of the conference, added: “This conference has generated a lot of interest from housing professionals, policy makers and political leaders.

“This recognises the central role which housing can play in contributing to the economy, employment levels and the well-being ofour local communities.”

The Conference is taking place at the Hilton Hotel in Belfast today, Thursday October 18 and tomorrow, Friday October 19.

Speakers at the conference include:

To find out more about the conference visit:-http://www.cvent.com/events/housing-conference-of-the-isles/event-summary-a7330455ed3f4e859b7705fec0d2ab15.aspx