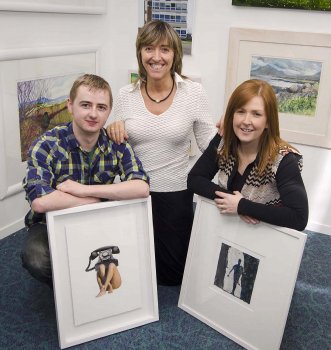 University of Ulster art graduates are exhibiting and selling their work alongside some of Ireland’s top artists – including Neil Shawcross and Ian Cumberland – at a leading charity event in Belfast this week.

It’s the first time emerging young artists have been invited to exhibit at the annual War on Want Art NI Aid exhibition and auction, which raises money for the poorest and most vulnerable people in sub-Saharan Africa.

The event is being hosted by the Royal Ulster Academy at its gallery in River House, and features more than 200 paintings, sculptures, ceramics and prints from acclaimed artists such as Colin Davidson, Rita Duffy, Graham Knuttel and Mark Shields.

Nine graduates from the University of Ulster will be exhibiting and Associate Head of School of Art and Design Debbie Fraser described it as a fantastic opportunity for them.

“To gain exposure to the general public and exhibit in such a worthwhile event is to be celebrated,” she said.

“The University of Ulster’s School of Art and Design is delighted to be involved in this venture. We are really proud of our graduates and the high standard of work they have created.”

The exhibition opens tomorrow – Wednesday November 28 – and a number of pieces of artwork will be auctioned at 8pm the following day by Daniel Clarke of Ross’s Auctions.

Jackie Trainor, Head of Fundraising at War on Want NI said this year’s event was shaping up to be better than ever.

“We are so grateful to all the artists who have agreed to participate and are generously donating 50 per cent of the sale price to War on Want NI,” she said.

“The funds raised will go straight into the life-changing programmes we run in Malawi and Uganda.

“These programmes provide vital resources and training to help some of the poorest and most vulnerable members of society learn the skills needed to earn money and become self-sufficient.”

Julia D’Arcy, Chair of the Art Aid Committee added: “The city centre location will hopefully encourage lots of people to pop in and take a look round - they may find the perfect Christmas present.”

Colin Davidson, President of the RUA and University of Ulster graduate said the Academy was delighted to host this year’s War on Want Art Aid at River House.

“It’s an exciting mix of artists and, with a range of paintings, sculpture, ceramics and prints, there will definitely be something to suit all tastes and budgets.”

For more information on the event contact Jackie Trainor, War on Want, phone 028 9023 2064 or email jackie@waronwantni.org

War on Want NI is a local charity which delivers sustainable livelihood projects in sub-Saharan Africa.

It was set up over 50 years ago and runs 13 charity shops throughout Northern Ireland.

The charity’s survival depends on support from statutory bodies and the generosity of public donations and philanthropic funders.

For the past four years it has partnered with both the RUA and its sponsors KPMG to organise Art Aid.

Last year’s event raised £92,000, half of which went directly to War on Want NI.

Caption: University of Ulster Artists in Residence Declan Byrne and Joanne Walker, pictured with their exhibition work alongside Associate Head of School of Art and Design, Debbie Fraser