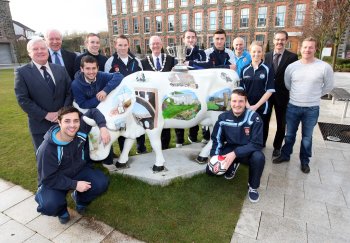 Ireland’s oldest all-island senior soccer competition, the Collingwood Cup, will be held at the University of Ulster’s Jordanstown campus next year.

Details about the competition, now in its 99th year, will be announced by Dr Nigel Dobson, Head of Sports Services at the University and the Mayor of Newtownabbey, Alderman Victor Robinson, at the Council’s ‘Theatre at the Mill’ today.

The 12-team tournament is set to take place on February 25 to 28 at the University’s state-of-the-art Sports Centre.

Dr Dobson said: “We are delighted to be staging this prestigious tournament at the Jordanstown campus in the Borough of Newtownabbey, and we sincerely thank Alderman Victor Robinson for the Council’s support of this important student soccer tournament.

“We have a fabulous opportunity to showcase the completion of our £20m capital investment in outdoor and indoor sports facilities prior to the 2013 World University Games.

“My thanks go to all our partners here today including; the Irish Universities Football Union, the Irish FA, The Milk Cup and potential sponsors.

“My best wishes go to Taylor Kirk and his Committee who will deliver this event next February. This is truly a student event - run by students and played by students- we are looking forward to the local community embracing its potential.”

The draw for the competition was also held at the launch event today, which was attended by IUFU representatives and IFA President Jim Shaw.

Alderman Robinson added: “We are all excited that this prestigious footballing event is coming to the Borough and we look forward to welcoming teams from all over Ireland and I’m sure the teams travelling from as far afield as Cork and Limerick will get a warm welcome.

“The tournament also gives the Council the opportunity to further develop the strong partnership with the University which is growing stronger by the day and helping to develop and promote sport in the Borough.”

The University of Ulster has hosted the Collingwood on two other occasions, the first in 1980 when its student team won the trophy for the first time. Since then Ulster has gone on to win it five other times under the guidance of Shane McCullough, John Sugden and Jim Lawlor, who is now Chief Scout for Manchester United worldwide.

The High Performance Centre at the Jordanstown campus, which was opened by Lord Coe, is home to the Sports Institute of Northern Ireland.

The world-class facility has been used as a training base for London 2012 Olympians and Paralympians as well as the Ulster Rugby squad, Irish cricketers, leading European Tour golfers, motorsport and Gaelic Games stars.

Speaking at the launch, IUFU Chairman Terry McAuley, said: “We are delighted that the University of Ulster has agreed to host the Collingwood Cup in February 2013.

“The Cup has been played on 92 occasions in almost 100 years. There are very many stories associated with the Cup, the competition itself and the players and management teams throughout the years most of which grow in their fantasy and proportion in the recounting over a ‘quiet glass of wine’ by graduates every year.

“We in the IUFU are proud of the Collingwood tradition and the fact that it is an all-island competition and we wish all the teams the best of luck not only in the draw, but also for the tournament itself.”

The Collingwood Cup was established in 1914 by Professor Bertram Collingwood, Professor of Mathematics at UCD and nephew of Charles Dodgson, an Oxford Mathematician, but better known as Lewis Carroll, author of ‘Alice in Wonderland’.