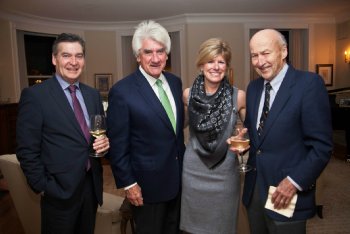 A new initiative at the University of Ulster to jointly honour Nobel Peace Prize laureate Professor John Hume and former US House of Representatives Speaker Thomas P O'Neill has been the focus of a prestigious event in Boston.

Local dignataries gathered in the Boston home of Thomas P O'Neill III and Shelly O'Neill to learn more about the John Hume and Thomas P O'Neill Chair in Peace, which will be based in the University's Magee campus, at an event co-hosted by the American Ireland Fund.
Once established, the Chair will form part of a wider initiative building on the work of the International Conflict Research Institute (INCORE) at Magee, which has pioneered peace building work around the world for over three decades.

University of Ulster Vice-Chancellor Professor Richard Barnett, who attended the Boston event, said: "The University is very grateful to Thomas P O'Neill III, Shelly O'Neill, the wider family circle and the American Ireland Fund for organising this event and enabling us to reach an audience drawn from Thomas P O'Neill's beloved home state of Massachusetts and explain how we are honouring these two great statesmen.

“The John Hume and Thomas P. O’Neill Chair in Peace will be a prestigious full-time academic position based at Magee, honouring both men’s significant contributions to peace, and their unique friendship. It will also play a pivotal role in overseeing a new INCORE peace initiative which will train the next generation of peacemakers from around the world."

Thomas P O'Neill, who hosted the Boston event, said the family was delighted the Chair, the most senior of academic positions, was being established to commemorate both Speaker O'Neill and Professor Hume.

“This Chair is the perfect way to not only commemorate the vision of Northern Ireland Peace that John Hume and Thomas P. O’Neill embodied, but to ensure that it is kept alive for generations to come,” he said.

“It is an honour to join with friends and family to celebrate this important tribute to the legacies of John Hume and my father.”

The Chair also commemorates a strong professional and personal relationship between John Hume and Speaker O’Neill, which developed during the dark days of ‘Troubles’ in Northern Ireland with the goal of promoting a peaceful resolution.

1. The Hume O'Neill Chair will be an endowed, full-time academic position, based on the Magee campus and will oversee a new INCORE Peace Initiative (for which the University is currently fundraising) - an expanded programme of activities will include:

2. INCORE has pioneered practice-based learning on conflict, developed a global network of peacebuilders and built a proud heritage of active involvement in peacemaking.

3. The new INCORE Peace Initiative will build on the success of the original Tip O’Neill Chair, supported by The Ireland Funds, which, under John Hume’s tenure (2002-2009), gave the University incredibly high visibility by attracting an unparalleled group of international figures (for example, Bill Clinton, Hillary Rodham Clinton, Kofi Annan) to the Magee campus to lecture on the subject of peace.