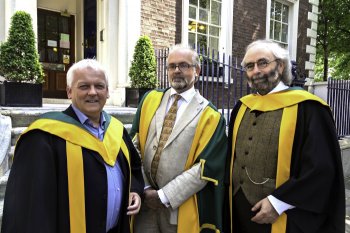 University of Ulster academics ProfessorJohn McCloskey and Professor Ullrich Kockel have been elected to membershipof the Royal Irish Academy (RIA), Ireland's pre-eminent learned society. They were among only 22 academics on the island of Ireland to achieve this academic distinction.

Professor Kockel is Chair of Ethnology and Folk Life in the School of English and History at the Magee campus and in the top rank of scholars in the field of European ethnology.

Membership of the RIA is the highest academic honour available to scholars working in Ireland and Professors McCloskey andKockeljoin a distinguished group of University of Ulster academics who have been elected to the RIAon the basis of their published world-ranking research andscholarship.

Professor of Geophysics and a pioneering researcher,Professor McCloskey was named in the "Eureka 100" list of the UK's 100 most influential scientists in 2010. Asadvisorto non-governmental organisations (NGO)and state agencies, he is an ardent advocate for national and international action to embed contingency disasterplanning inmany of the world's poorest quake-proneregions.

He rose to international prominencein 2005 when he forecast a large quake off north western Sumatria, 10 days before it struck. The warning, published in the authoritative journal "Nature" in March that year, received global media coverage at a time when Indonesia and surroundingwere still trying to come to terms with impact of the massivetusunami in that region on Boxing Day 2004.

Professor McCloskey said: “This is a huge honour, to be elected to Ireland's leading academic association, and I am immensely grateful to the RIA and its members for bestowing it on me.

"I regard it as an important accolade for the University of Ulster's School of Environmental Sciences, which is one of Ireland's most advanced schools in this field. Undoubtedly, too,it is a profoundly significant endorsement of the work of my colleagues in the Geophysical Research Group. The team has 12 members and all of them have contributed to this honour, and I am indebted to them."

Professor McCloskey, who is from Derry-Londonderry,was educated at Chapel Road PS and St Columb’s College before going to Queen’s University Belfast where he graduated with a BSc in Geology.

He taught Physics in the secondary sector for 10 years before he began part-time study towards a PhD in the physics of earthquakes which he gained in 1992.He joined the University of Ulster as a post-doctoral researcher and received the European Geophysics Society’s Publication Award in 1993 for a paper published on his PhD work and the Institute of Physics’ Teacher of Physics award for his work with Young Scientists the same year. He was awarded a Senior Distinguished Research Fellowship by the University in 2005.

Professor Kockel, who is a native of GÃ¶ttingen, Germany, is internationally recognised as a leading innovative thinker in the field of European ethnology. Professor of Ethnology at the University of Ulster since 2005 and Visiting Professor of European Ethnology at Vytautas Magnus University, Kaunas, he has impressive record of publications in five languages, including four sole-authored books that display originality and outstanding scholarship.

During the 1990s, while based at the University of Liverpool, he worked closely with the European Centre for Traditional and Regional Cultures and the Tate Gallery. He is currently President of the International Society for Ethnology and Folklore (SIEF). In 2009 he established the SIEF Working Group on Place Wisdom. He was elected an Academician of the United Kingdom’s Academy of Social Sciences in 2003.

Working within an interdisciplinary framework, his main research interests include ecological ethnology, heritage tourism, reflexive traditions, counter-cultural movements, and intercultural philosophy. He is editor of the Anthropological Journal of European Cultures and a member of the editorial board of Ethnologia Europaea – the two leading journals in this field.

Commenting on his election to the RIA, Professor Kockel said while it was a great honour for him personally, it also reflected the growing recognition for his field of research, both nationally and internationally.

New members of the Royal Irish Academy were enrolled at a ceremony in Dublin today(Friday May 25). Welcoming them to the Academy, RIA President, Professor Luke Drury, urged the Irish government to make greater use of the resources available to it in the academic community, so that it can develop new and creative solutions and avoid the danger of ‘group think’.

Professor Drury said: He said:“At a time when trust in public institutions has been greatly undermined, we need reassurance that government is receiving good advice on what it should do and how it should do it. The State can, and should, turn to the academic community for expert advice, at far less cost than commissioning expensive consultants, and thereby support genuinely independent and occasionally critical voices.”