Rock and Popular Music in Ireland: Before and After U2 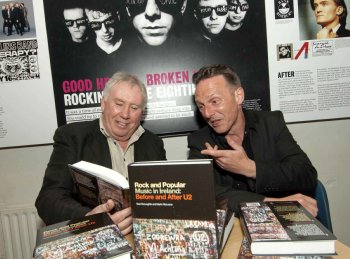 The launch of a book co-written by a University of Ulster academic charting the history of Irish rock and pop has generated a lot of interest within the music industry.

Well-known figures from the world of rock music and literature gathered in the Oh Yeah Music Centre in Belfast recently to celebrate the publication of ‘Rock and Popular Music in Ireland: Before and After U2’, written by Martin McLoone, Professor of Media Studies at the University of Ulster, Coleraine and his former student, Dr Noel McLaughlin from Portballantrae, now a Senior Lecturer in Film and Television Studies at Northumbria University.

Published by Irish Academic Press, the book explores Irish rock's relationship to the wider world of international popular music through a detailed analysis of the island's most prominent artists and bands such as U2, Van Morrison, Rory Gallagher, Thin Lizzy, SinÃ©ad O'Connor, The Boomtown Rats and Horslips.

It also charts key musical movements including the Beat Scene, the Folk Revival, Northern Irish Punk and Dance Music in Ireland, with a fascinating chapter on Coleraine-born Gregory Gray, aka Paul Lerwill, who fronted Perfect Crime - one of the north-west’s most talented groups in the early 1980s.

Good Vibrations founder Terri Hooley, soon to be imortalised in a movie about his life; former members of Stiff Little Fingers; Frankie Connolly of Styx and guitarist Billy Harrison of legendary 1960s group, Them (who launched the career of Van Morrison) attended the celebration and mingled with music authors, journalists and local artists and music fans.

Professor McLoone, who originally hails from the Creggan Estate in Derry~Londonderry, has been teaching at the University of Ulster since 1986 and first collaborated with Dr McLaughlin on an article in 2000.

“When Noel was a PhD student of mine at Coleraine, I found his work on music in the 1980s/1990s extremely good and it occurred to me that some of his writing combined with mine on the earlier period, might be very interesting,” he revealed.

“The book has taken two years to write, but we’ve spent the past 10 – 15 years talking about it,” he laughs.

“My own interest in popular music goes right back to even before my teenage years. I remember being excited seeing Van Morrison’s band THEM on Top of the Pops when I was very young and feeling a strong sense of local pride in the fact that a Northern Ireland band had ‘made it’.

“Van Morrison and his music features heavily in the book and I have purchased every album he has ever produced. I have probably bought his masterpiece album Astral Weeks 10 or 15 times, either to replace my worn-out copies or as Christmas or birthday presents to friends and acquaintances over many years. “That’s a lot of money, Van!

“I was a teacher in London in the late 1970s and I remember marking student work at home while listening to John Peel on the radio. I can remember him introducing Derry’s finest, The Undertones, by saying that the band kept ringing him up but he couldn’t understand their broad Derry accent.

“He played ‘Teenage Kicks’ that night and you just knew that this was an instant classic. I was again enormously proud of my hometown band. I now consider that The Undertones were one of the finest bands of the punk era.

“As well as chapters on big names such as Morrison, the book also highlights talent such as Skid Row, Grannies Intentions and Gregory Gray, who didn’t quite make the big time, but who left an important legacy.”

Rock and Popular Music in Ireland: Before and After U2 by Martin McLoone and Noel McLaughlin is published by Irish Academic Press and is on sale now (paperback, £19.99).

CAPTION: Professor Martin McLoone (left) and Dr Noel McLaughlin, authors of Rock and Popular Music in Ireland: Before and After U2

Dr Noel McLaughlin is Senior Lecturer in Film and Television Studies at Northumbria University and has written numerous articles on popular music and Irish rock.Ã¢€¨

Martin McLoone is Professor of Media Studies at the University of Ulster and author of Film, Media and Popular Culture in Ireland (Irish Academic Press, 2008).