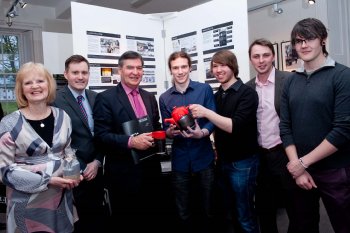 Productions created by the brightest young media professionals of the next generation have gone on display as part of the University of Ulster’s End of Year Media Show. Organised by the School of Media, Film and Journalism, the annual show features work from Interactive Media Arts,Photo Imagingand Media Studies and Production students.

The exhibition, which is the School’s largest to date, features over 70 projects in script writing, video, radio, and photography.

Dr Colm Murphy, Head of theSchool of Media, Film and Journalism, said: “Judging by the talent on display it is evident that the emerging generation has the creativity to exceed that available anywhere in the world. This show is a testament to the hard work and dedication of our students, their lecturers and their parents.”

The show also includes a short film made in Mandarin and Englishby students from Hubei Normal University in China who are studying in Coleraine.

Three of the projects featured in the exhibition wereproduced in collaboration with the University’s Science Shop, which works with community and voluntary groups throughout Northern Ireland.

Claire Mulrone, Manager of the Science Shop, said: “Three teams of students undertook the challenge of working with a community partner and all three teams excelled themselves.

The End of Year Media Show is open to the public and runs until 17 May from 10am – 5pm (excluding Sunday) at the Flowerfield Arts Centre, Coleraine. The short films will be shown at 2pm, Monday – Friday in the Flowerfield auditorium. Admission is free.