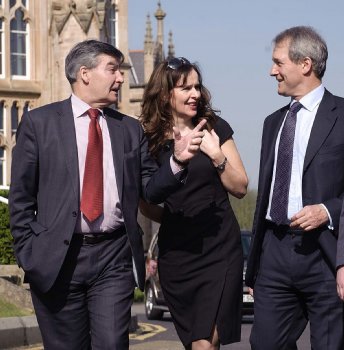 Secretary of State Owen Paterson, right, tours the Magee campus with the Vice-Chancellor, Professor Barnett, and the Provost, Professor Heenan

The University of Ulster this week hosted a visit to the Magee campus by the Rt Hon Owen Paterson, Secretary of State for Northern Ireland.

He was welcomed to the campus by the Vice-Chancellor, Professor Richard Barnett and Professor Deirdre Heenan, Provost of Magee.

It was Mr Paterson's first visit to the campus since becoming Secretary of State.

The Secretary of State toured the campus, and met students and staff from the Intelligent Systems Research Centre, from INCORE, and from the School of Creative Arts.

During his visit, the Secretary of State was briefed on developments at both the University as a whole and the Magee campus in particular.

The University's recently-announced plans for Magee include:

: the establishment of a Hume/O'Neill Peace Chair
: the creation of a new School of Irish Language and Literature at Magee
: the expansion of nursing at Magee
: 350 additional undergraduate places for the campus and
: an increase in numbers of students studying computing, and creative technologies at Magee

At the Foyle Arts Building, the Secretary of State heard a performance by the University’s choir, while later, at the Intelligent Systems Research Centre, he was briefed on the latest advances in artificial intelligence and robotics from Ulster scientists.

Professor Barnett said: “I’m delighted that the Secretary of State has welcomed our growth plans for Magee. He was convinced that investment in University expansion represented the fastest path for the transformation and regeneration of the city.”

Professor Heenan said: “The Secretary of State was very impressed by the high calibre of research and creative work under way at Magee, and was particularly eager to learn about our extensive links with the business community.”