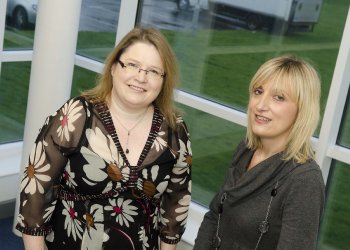 The goal of helping people with incurable cancer cope better with symptoms and treatment has received a boost with major cross-border support for a research study by a lecturer who works jointly at the University of Ulster and Northern Ireland Hospice.

Cathy Payne, a widely experienced palliative care specialist, has been awarded a major scholarship by a North-South consortium of hospices and universities to research her ideas on how people with advanced lung cancer might combine nutrition and physical activity to self-manage aspects of their condition.

She said: “People are often surviving longer with advanced cancer and there is recognition that supporting individuals to self-manage their condition through tailored rehabilitation advice and support may significantly increase their quality of life and generally make life more bearable.

“It is about enabling people to step back from being a patient to being a person again.”

It will enable her to focus on research and training that should bring new insights to palliative rehabilitation and lead to a Doctorate as a mark of her expertise.

AIIHPC was officially launched in Dublin and Belfast last October and this is its first Doctoral Fellowship award. Mrs Payne, who qualified as a clinical dietitian in 1997, became the first Palliative Care Dietitian in all Ireland in 2004 and its first Lecturer in Palliative Care for Allied Health Professionals in 2007.

Dr Sonja McIlfatrick, Head of Research, AIIHPC, said: “We are delighted to award the Fellowship to Cathy Payne. Research and a building of evidence base is a key priority for the Institute so we were pleased to collaborate with the Public Health Agency on this initiative.”

Dr McIlfatrick, who is also a Reader in Nursing Research and Development at the University of Ulster, added: “We look forward to supporting Cathy in her research. Improving knowledge through research such as this is hugely important for the future of palliative and end of life care development in Ireland and Northern Ireland.”

Mrs Payne will research rehabilitation interventions aimed at reducing symptom burden and improving quality of life in individuals with non small cell lung cancer (NSCLC). It is anticipated that the findings will be applicable to people with other forms of incurable cancer and to people in the advanced stages of other illnesses requiring rehabilitative care.

Mrs Payne said: “Palliative rehabilitation can have a significant positive impact on a person’s illness day to day- I don’t mean by ‘beating’ cancer but by enabling people to live in a more resilient way. This research is about assisting people to participate fully in their own health care, maintaining hope and improving the experience of daily living in the face of incurable illness.”