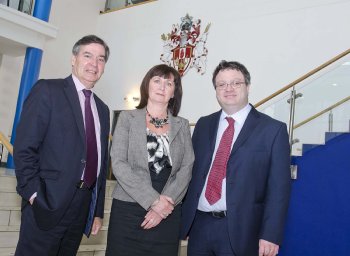 Employment and Learning Minister Dr Stephen Farry has announced a £700,000 extension of funding for the University of Ulster's Step-Up initiative. The news came as he visited a Science Fair at the University's Jordanstown campus,

The Step Up programme provides new learning opportunities in science for talented young people to raise pupil aspirations and academic performance thereby enabling them to progress to Higher Education.

The Minister said: “Over the years the Step-Up programme has become extremely successful in engaging with both primary and post-primary school pupils. It encourages pupils to study science and related subjects and also assists students, who might never otherwise have considered Higher Education as an option, to raise their aspirations and educational attainment in order to progress to Higher Education programmes.

“It is with this knowledge that I can announce an extension of funding for the Belfast Step-Up programme to the value of £700,000. This will extend funding for the programme up to the end of academic year 2015/16.”

Welcoming the Minister's announcement, Sylvia Alexander, Director of Access and Distributed Learning at the University of Ulster said: "The University of Ulster is very committed to opening up educational pathways, particularly for those people from disadvantaged communities that traditionally have tended to shy away from university, and is proud of its widening access activity across all its campuses. We believe it is a great springboard for students who will make a significant contribution to the development of the economy."

The Science Fair offered pupils an opportunity to showcase their science research projects to their peers and subject experts from across Northern Ireland. Individual prizes were awarded to winning team members, with £500 Science equipment being awarded to the top primary and post-primary school.

At the event the Minister discussed the science research projects with the pupils and praised their achievements. He also paid tribute to parents, industry leaders and educationalists for their support of the Step-Up initiative and commended the University on the outstanding success of the programme.

The Department for Employment and Learning is currently leading on the development of an integrated Regional Strategy for Widening Participation in Higher Education.

The Minister concluded: “Widening participation in Higher Education by students from under-represented groups is one of my Department's key strategic goals. People who are most able but least likely to participate in higher education must be given every encouragement and support to achieve the necessary qualifications to apply to, and to benefit from higher education irrespective of their personal or social background.