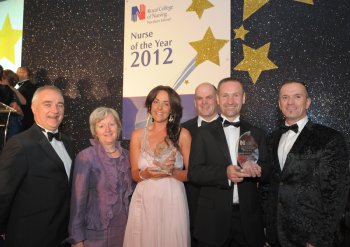 University of Ulster students and staff have scored major successes at the prestigious Royal College of Nursing awards.

Undergraduate student Michelle Doherty won the Royal College of Nursing Northern Ireland Student Nurse of the Year award and lecturer Dr David Chaney scooped the RCN’s N.I. Nursing Research Award. Both are based at the Magee campus in Derry~Londonderry.

There was also a clean sweep for the University’s School of Nursing in the research category, with two of its recent PhD students, Dorry McLaughlin and Lisa Jeffers finishing joint runners-up.

Dr McLaughlin is a Lecturer in Palliative Care at the Northern Ireland Hospice and an Associate Lecturer at the School of Nursing in Jordanstown.

The Public Health Award went to Margaret Goodwin, an occupational health nurse with VION Foods in Cookstown, Co Tyrone, who for the past 10 years has been one of the University’s Practice Teachers for nursing students from Ulster.

The annual RCN Northern Ireland Nurse of the Year awards, held at the Culloden Hotel in Belfast, was attended by nurses, managers, health and social care trust representatives, academics, politicians and policy makers.

The awards are a further boost to the School of Nursing and the Institute of Nursing Research which finished in the top three of all UK universities in the last National Research Assessment exercise.

Professor Owen Barr, Head of the School of Nursing, said: “This was a very positive and a very public showcase for the work of the School. Many people commented to me during the evening about the high quality of the entries submitted from the University of Ulster.

“I congratulate the individuals who won awards and those who were runners-up. Their success is the School’s success, and a tribute to the internationally acknowledged quality of teaching and research in Nursing at this University.”

Michelle Doherty, who lives within walking distance of Magee in the Northland area of the city, said afterwards: “It was absolutely amazing, it was the best feeling in the world to get some recognition for what I’ve been doing.”

She started her BSc (Hons) Adult Nursing course in September 2009. Michelle, who “always wanted to be a nurse”, explained that after working as an auxiliary nurse for three years the course was the next natural progression in terms of her career development.

Dr Chaney, who lectures in Nursing, is from Dublin. He began his nursing training in north London in 1989. He joined the staff of the University of Ulster in 2002 and gained his PhD in 2010 for research that formed the basis of his new RCN award.

He has developed the island of Ireland’s first structured education programme for adolescents who have Diabetes Type One. The programme, called ‘Choice’, is aimed at helping them to improve their quality of life and their blood-glucose control.

He said: “My hope was to have a PhD that wouldn’t just sit on a shelf but would be of use in a practical way. The fact that this programme is now being rolled out across Northern Ireland and down as far as Drogheda and Sligo is absolutely wonderful.”