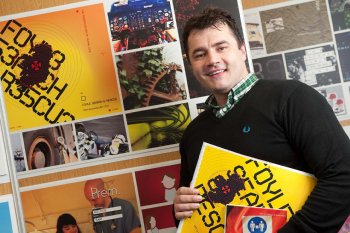 Design students at the University of Ulster brought the curtain down on another very successful year with their end of year show in the Foyle Arts Building.

Now firmly established as one of the highlights of the academic year at Magee, the Design Show celebrates the undergraduate design provision in the School of Creative Arts and collaborative teaching with the School of Computing and Intelligent Systems.

On display was an eclectic mix of final year projects covering 3D design, interaction design and moving image design by B.Des and Communication (Hons) students who are due to graduate next month.

The projects included a documentary on Foyle Search and Rescue organisation which is now being used by the charity as part of its educational pack for schools; a 3D project to visualise cardiovascular surgical procedures for researchers; and a phone app to help mothers bond with their premature babies.

Dublin based designer and current President of the Institute of Designers in Ireland, John Walsh who was guest speaker at the show, congratulated all the students and said they should be really proud of their work.


“And I’m not just staying that because I’m here as your guest! The quality and diversity of the work on display highlights the relevance and importance of good design.

“It is important, not just in a creative and aesthetic context but because of how it can improve the environment and the effect that this can have on our physical and mental being.”

He said he was very impressed by the innovative curriculum, the strong links with professional practice and the enthusiasm of staff and students alike, all of which was reflected in the quality of the show.