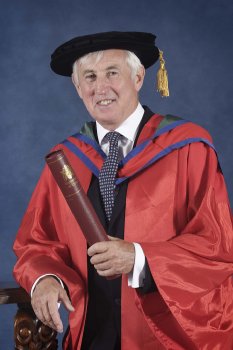 One of Northern Ireland’s best known newspaper journalists is being honoured by the University of Ulster today.

Edmund (Ed) Curran, a former Belfast Telegraph Editor in Chief, will be awarded the honorary degree of Doctor of Letters (DLitt) in recognition of his services to journalism.

Ed joined the Belfast Telegraph in 1966 as a graduate trainee reporter and worked his way up to the editor’s chair.

He held the position for 12 years before becoming editor-in-chief, and was also launch editor of sister paper, the Sunday Life. In 2006, he was awarded the OBE for services to journalism.

Since retiring as Editor in Chief, he has continued to contribute a regular column to the paper. He has also played a prominent role in the training of journalists, serving on the board of directors of the National Council for the Training of Journalists.