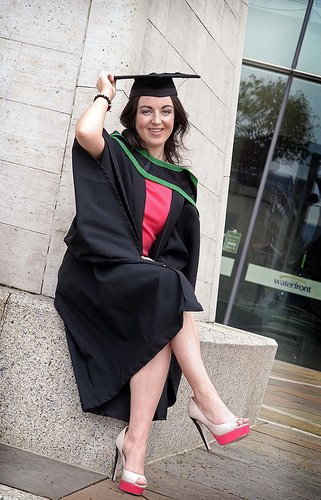 Carol Duffy from Newry has delivered the much-heralded Sport for LIFE programme as an Ulster Sports Outreach Officer, encouraging primary schoolchildren across Northern Ireland to participate in physical activity for life.

She was also part of an undergraduate student team of tutors who provided training on the Sport for LIFE initiative to pre-service trainee teachers at Stranmillis College.

Carol has also been awarded the Volunteer NOW 200-hour award of excellence for Volunteering in Sport and featured as an ambassador for the University on the 2011 Campus Engage Year of the Volunteer roadshow.

This ambassadorial role resulted in Carol representing the University at an event hosted by Irish president Mary McAleese in 2011.

She will be presented with another accolade today, the Sport Northern Ireland Award for the best student on the BSc Hons Sport and Exercise Sciences degree.

Commenting on these impressive achievements, Professor Marie Murphy said: “Carol has proved to be an exceptional student both academically and through extra curricular voluntary activity with the Ulster Sports Outreach Unit in the Ulster Sports Academy.”

“The opportunities which I have been afforded have enabled me to maintain a balancebetween my sport and studies, allowing me to develop both as a student and an athlete.

“It is so much easier to achieve success when you are surrounded by a network of people who support and encourage you. I am personally indebted to the University and know that they will continue to support me in the future. I am looking forward to continuing my studies and completing my PGCE at the Coleraine campus next year.”

In her spare time Carol is an Irish Senior International Karate competitor and will be competing in the Karate World Championships in Paris in November 2012. She was a Silver Medalist in the 2012 British University and College Sports Championships (BUCS).

Carol has represented Ireland during the 2011/2012 competitive season at European and World Karate Premier League events, winning European bronze at both the British and Belgian Open Karate Championships.

She was also nominated for the University’s student sports awards, Colours, making the final three shortlist to receive the much coveted Silver Salver award for most outstanding sportsperson in Jordanstown in this year’s ceremony.

This summer, Carol will be volunteering at the London 2012 Olympic Games as a London 2012 Gamesmaker and will be working at the tennis in Wimbledon during the Games.