Jennie Has Designs on Following in Her Grandfather's Footsteps

When Jennie Brown chose to study Textiles and Fashion Design at the University of Ulster, there was one person who had a huge influence on that decision.

Jennie Has Designs on Following in Her Grandfather's Footsteps 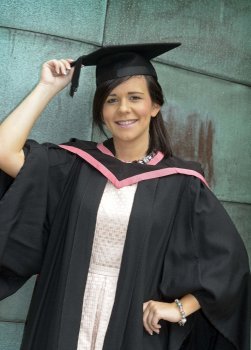 When Jennie Brown chose to study Textiles and Fashion Design at the University of Ulster, there was one person who had a huge influence on that decision.

Her late grandfather, Russell Payne, died when she was only eight-years-old but his legacy continues to live on through his granddaughter.

Born in Warwickshire in 1925, Russell joined the RAF in 1942 and spent the next five years as a wireless operator, working for much of this time in the Middle East.

But it was the clothing industry which was to draw him to Northern Ireland and in 1949 he left England for a job as a dye house manager in a hosiery manufacturing company in Newtownards.

He spent 30 years there, before moving on to Dunluce Knitwear in Coleraine when he became a Managing Director.

Jennie, who is now 23, has only a few memories of Russell who died in 1997. However, she does remember seeing photographs of him in uniform.

“I was aware that he was in the RAF during his late teens/early twenties and before the beginning of my final year I began looking at my family tree for inspiration,” she explained.

“I came across two photo albums packed with photographs, certificates, badges, tickets, maps and all sorts of other documents from his time in the RAF. He had even written little passages beside certain items to describe what they were used for.

“Considering he had only spent five years working in the RAF, it was obvious that it had made a very big impact on his life.

“For my end of year collection I was heavily inspired by my grandfather’s scrapbook and began to research this period in history.

Because her grandfather dedicated so much of his life to the knitwear trade, Jennie decided to make this the focus of her collection.

She has incorporated many of the military aspects of his uniform in her five outfits, using such textiles as Argyle, flannel and lace, popular fabrics from the 1940s.

And, naturally, each of the five contain an element of knitwear, from brightly coloured tank tops to knee high socks and woollen skirts, one decorated with the title of the famous wartime song ‘It’s a long way to Tipperary’.

Jennie, who’s from Bangor, graduates today with a BDes Hons in Textiles and Fashion and plans to develop products for her own brand, ‘Agnes and Dottie’.

She also aims to sell her creations on the internet and hopes to take part in the University of Ulster’s artist in residence programme.