University Of Ulster Builds On The Past For A Greener Future 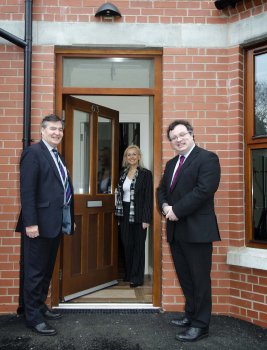 The University of Ulster today launched groundbreaking research into improving energy efficiency in the home and reducing fuel poverty.

Two purpose built, fully functioning terraced houses have been constructed at the University’s Jordanstown campus, in order to monitor how much energy is lost in a typical home over a measured period of time.

Once this information has been gathered and assessed, researchers will then be able to explore what savings can be made by ‘retrofitting’ energy efficient technologies.

This process involves the refurbishment of existing dwellings to improve their thermal/energy performance, by fitting greener technologies and insulation products.

Each of the Jordanstown houses, exact replicas of properties built in the Ravenhill area of east Belfast during the 1900s, will be occupied by a member of staff and their families.

Speaking at the Jordanstown campus, Dr Farry said: “Our commitment to this project demonstrates the importance of the critical contribution that research and development makes to economic development and competitiveness in Northern Ireland.

“As the major suppliers of research in Northern Ireland, our universities have a vital role to play in producing high quality research and translating that research into the market through Knowledge Transfer.

“Skills will be a key contributor to maximizing the potential economic returns from sustainable energy and ensuring Northern Ireland meets the energy targets contained within the Strategic Energy Framework for Northern Ireland.”

The research was initiated in response to the Climate Change Act of 2008 which demands a huge reduction in carbon emission levels by 2050 as well as the need to reduce fuel poverty which is on the increase.

It’s been estimated that between 70 and 80 per cent of dwellings, which will be in use in 2050, already exist today and that’s one of the reasons why the University saw a need to become involved in the retrofit research programme.

Said Professor Barnett: “Research in the built environment at the University is ranked among the top 15 across all UK universities and it demonstrates, once again, that we’ve achieved this leading position by focusing on applied research.

“In this case, our research has real potential to reduce our carbon footprint, improve the living conditions of ordinary people and create jobs in the building industry.

“We are grateful to the Department for Employment and Learning for providing funding for this facility.”

“Meeting the challenges of fuel poverty in a proven, cost effective, systematic manner enhances Northern Ireland both socially and economically, through improved living standards and the deployment of indigenous technologies,” he said.